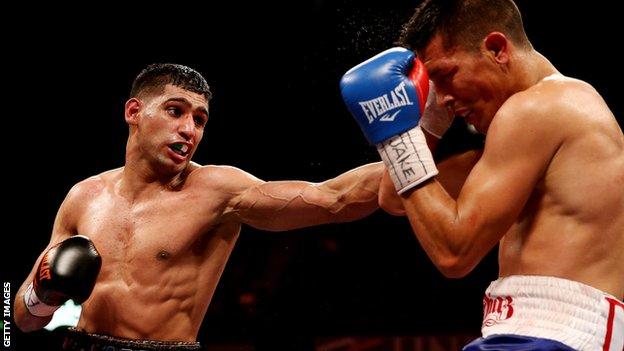 Khan had expected to challenge boxing's pound-for-pound number one in Las Vegas on 3 May, after he won a fans' poll to decide Mayweather's next opponent.

The 27-year-old then criticised the American for taking the "easy option" in choosing Marcos Maidana instead.

"If you and Broner end up fighting each other on my show and you win I'll fight you," Mayweather responded on Twitter.

Khan signed a deal in December that he hoped would lead to a showdown with the 37-year-old, a 10-time world champion in five weight divisions who currently holds world titles at welterweight and light-middleweight.

However, it appears the Briton may yet be given the opportunity should he win the proposed bout with Broner, 24, on the undercard of Mayweather's welterweight unification fight with 30-year-old Argentine Maidana at the MGM Arena.