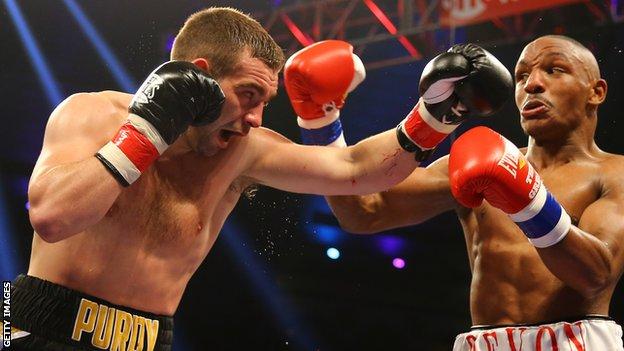 Former British welterweight champion Lee Purdy is unsure if he will box again after suffering a career-threatening eye injury.

The 26-year-old from Colchester has had three operations on a severed and detached retina, damaged in his defeat by Leonard Bundu in December.

"They've told me they'll get some vision back, but they don't know how much," he told BBC Sport.

"I'd love to be able to fight again, I believe there is more to come."

Purdy won the British welterweight title in 2011 and later went on to hold the IBF international belt at the same weight.

He received a boost in profile last year when he stepped up as a late replacement for the injured Kell Brook to face Devon Alexander in Atlantic City.

Purdy, whose record stands at 20 wins, five losses and one draw, failed to make the weight to challenge for Alexander's IBF world title, but lasted seven rounds before being pulled out by his corner.

His 12th-round stoppage defeat by Italian Bundu in a challenge for the European title almost convinced the Essex boxer to quit the sport.

But after three operations, with a fourth to come at the end of the month, Purdy said the injury that has left him with barely any vision in his left eye has reinvigorated his desire to fight again.

"I'm absolutely devastated at the moment. Before the Bundu fight I thought if I lose this that's it," he said.

"I didn't have an excuse after the fight. But in a way I'm glad that my eye was bad, because I've got something to fall back on. Somewhere in that fight I was fighting with one eye.

"But it's just how good my vision is going to be because I have to pass exams each year. If it's not good enough to pass the eye tests, that's career over.

"I can do anything my trainer asks me to do in training, but it seems to fall apart when I'm in the ring. If I can ever fight again this will take me to another level."