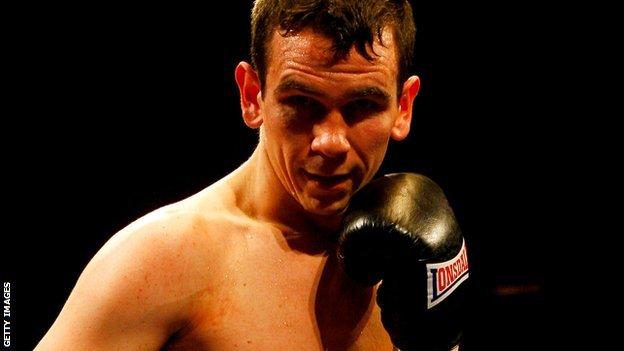 Martin Ward insists he belongs "at the top" ahead of his IBF bantamweight world title fight with Stuart Hall.

The 26-year-old, who has won 18 out of his 20 career fights to date, meets champion Hall in Newcastle on 29 March.

The Durham boxer told BBC Tees: "I believe in my ability. I'm as good a bantamweight as there is kicking about.

"Yes, it's a fast-track to the big time but that's where I belong. I belong in the big time. I belong at the top level, with the top elite fighters."

Hall, 33, became the oldest British fighter to win a world title belt at the first attempt when he beat Vusi Malinga on a unanimous points decision in December.

"We both live in the north-east so it seems like the logical fight. It has come along a bit fast and as a bit of a surprise. It's a big step up from domestic level to world level.

"If things go wrong - which they won't - I'll expect to get another shot at the world title anyway," he said.

Ward suffered only the second defeat of his career when he challenged Lee Haskins for the British bantamweight title last year.

Haskins recently claimed that Hall had refused to fight him, but Ward is unconcerned by side issues.

"I just take it all in my stride," he continued. "I'm a laid-back fellow.

"Weight is not a problem. Everything is bang on track.