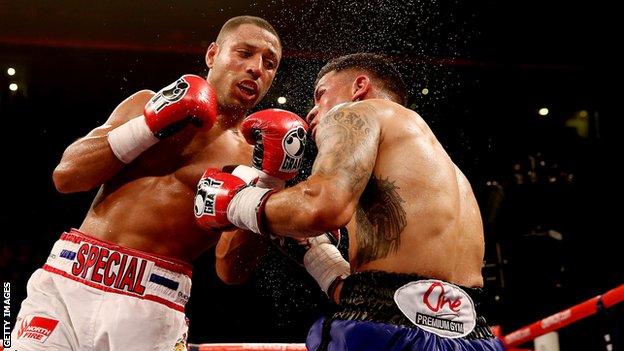 Britain's Kell Brook will fight for the IBF welterweight belt in the summer after beating Mexican Alvaro Robles with an eighth-round stoppage.

Brook extended his record to 32-0 as Robles' corner threw in the towel at the Echo Arena in Liverpool.

"I'm only after those elite fighters now," Brook, 27, told Sky Sports. "I'm happy I got this out of the way and the next one is for the IBF strap."

He will face Shawn Porter or Paulie Malignaggi, who fight on 19 April.

"It's getting hard to get up for these kind of kids now," added Sheffield's Brook after dominating 25-year-old Robles, who had lost only twice previously.

Londoner Kevin Mitchell, 29, eased past 22-year-old Georgian Mikheil Avakyan in two rounds to set up a potential bout with IBF lightweight champion Miguel Vazquez on the undercard of the rematch between Carl Froch and George Groves at Wembley on 31 May.