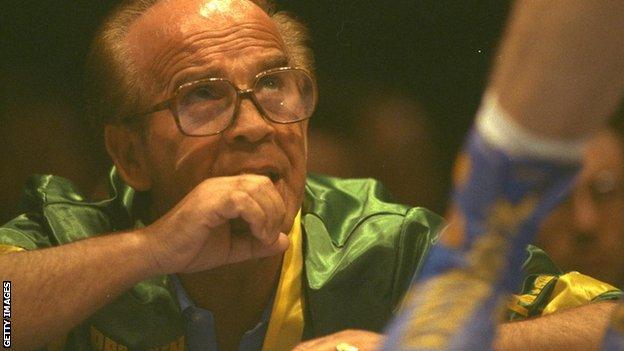 Born Monek Prager in Krakow, Poland, Duff had a four-year career as a boxer in 1940s England, later rising to prominence as a manager and promoter.

He left boxing in 1999, having vowed to retire if Billy Schwer failed to win the WBC world lightweight title.

Mickey Duff worked with some of boxing's biggest names as a promoter, including:

Conteh, who held the WBC light-heavyweight crown from 1974 to 1977, said Duff loved the sport and knew it inside out.

"I turned pro in 1971 and Mickey was my promoter until I won the world championship in 1974," he told BBC Radio 5 live. "He was a boxer himself from a tough background so he knew where we were coming from.

"You listened to him and you trusted him. He was a great matchmaker and offered a tremendous vehicle for someone like me to turn professional.

"In those days you had to come to London to make it big. He had some fantastic venues, such as Wembley and the Royal Albert Hall."

Aged 15, Duff side-stepped the British Boxing Board of Control to acquire a promoter's licence - by law a licence could not be issued to anyone aged under 16.

After forming partnerships with Jack Solomons and Jarvis Astaire, he became a widely respected figure in the sport and established a broadcasting alliance with the BBC.

Over the course of a career spanning several decades, Duff saw off competition from rival promoters and was reportedly the target of threats. East End gangsters the Kray twins are said to have once sent his wife a flower box containing a dead rat after he barred them from a show.

In the 1980s, Duff enjoyed a near monopoly on UK boxing, but retired from promoting having witnessed the rise of Frank Warren, whose standing flourished through new partnerships with broadcasters ITV and Sky.

Audley Harrison, who won super-heavyweight Olympic gold in 2000, said: "He left his mark on the game and was the main man for decades."

Barry McGuigan, president of the Professional Boxing Association and former WBA featherweight champion, described Duff as "a giant of boxing in a different era".

Duff was inducted into the International Boxing Hall of Fame in 1999 and will be fondly remembered for a quote that remains widely celebrated among senior figures in the sport: "If you want loyalty, buy a dog."