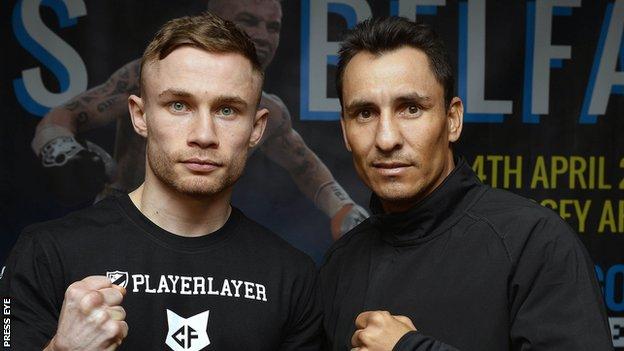 The multi-fight deal for Frampton's contests over the next 12 months, starts with the bout against Mexican Hugo Cazares on Friday, 4 April.

The final world title eliminator at the Odyssey will be on Radio Ulster FM & MW on Sportsound Special from 21:30 BST.

Frampton has won all 17 of his professional fights so far.

Victory for the super-bantamweight would set up a world title showdown with WBC champion Leo Santa Cruz.

Cazares has won 33 of his 40 fights and is a former world champion at super-flyweight and light-flyweight.

He tops the current WBC rankings, with 26-year-old Frampton at number two.

Frampton relinquished his European and Commonwealth belts in November in his bid to secure a world title fight.

BBC Sport NI Editor, Shane Glynn, said: "Carl Frampton and his manager and mentor Barry McGuigan have brought big time boxing back to Belfast, and I'm delighted that BBC Northern Ireland and BBC Radio Ulster is going to be involved in bringing the action live to our audience.

"There is something magical about listening to live boxing on the radio - I vividly remember listening to the Tyson versus Bruno fight live on the BBC, and more recently the first Froch v Groves bout on BBC Radio 5 Live - especially when you've someone with the experience and knowledge of Jim Neilly describing the action."

The boxing will be presented by Michael McNamee with Jim Neilly on commentary and analysis from former British and European champion Paul McCloskey and former British Welterweight champion Neil Sinclair.