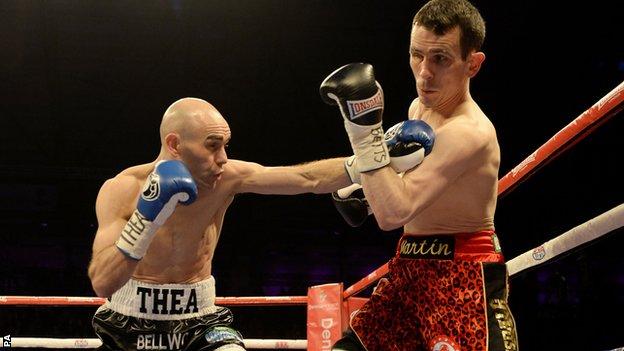 Stuart Hall retained his IBF world bantamweight title when a cut to Martin Ward's right eye meant their fight in Newcastle ended in a technical draw.

The English fighters accidentally clashed heads in the first round, and the bout was stopped in the second.

Hall, 34, edged round one in his first defence of the title and said he was "gutted" with the outcome.

It means the Darlington boxer has not fought an orthodox puncher in almost two years.

The 28-year-old was knocked down for the first time in his professional career when he walked on to a left hand from the WBO Africa champion.

But he regained his composure to comfortably win on all three scorecards and take his record to 19-0.

Hall (16-2-2) and 26-year-old Ward then contested a main event which would prove an anti-climax for a north-east crowd supporting two fighters from the region.

Hall, who became the oldest fighter to win a world title for the first time when he beat Vusi Malinga in December, looked in control in round one, but when he stretched to land a right hand his head collided with his opponent's.

"Stuart came with a right hand and as he rolled around he caught me," said Ward, who entered the fight with 18 wins and two losses.

"The saddest thing is the fans didn't get to see the fight but it happens in boxing. Neither of us proved what we wanted to."

Elsewhere, former Olympian Bradley Saunders, 28, maintained his unbeaten record with a ninth win - stopping Mitch Ward with three knockdowns in the fourth round.