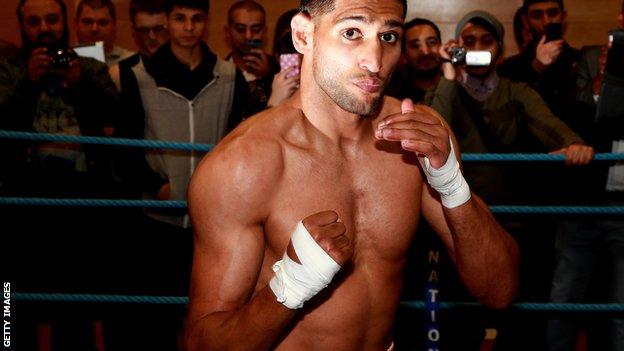 Amir Khan appears to have improved his chances of landing a lucrative showdown with Floyd Mayweather by teaming up with boxing adviser Al Haymon.

Haymon has guided Mayweather's career for years and is widely regarded as one of the most influential men in boxing.

Khan had hoped to make his welterweight debut against Mayweather in May, but he opted to defend his world title against Marcos Maidana.

The reclusive Haymon, a former music industry mogul who has close links with American television paymasters and promoters, already has potential Mayweather opponents Adrien Broner and Danny Garcia on his books.

Khan's decision to join up with Haymon comes after Golden Boy Promotions failed to secure the fight with the 37-year-old Mayweather.

Former light-welterweight champion Khan, 27, instead faces Luis Collazo, a former opponent of Ricky Hatton, on Mayweather's Las Vegas undercard but still hopes to meet the American in the future.

Khan, who has won 28 and lost three of his 31 fights, said: "I am very happy to have signed with Al Haymon, who has not only shown that he is a very astute businessman but is extremely knowledgeable of the fight game and always has his fighters' best interests at heart."

Khan has been without a manager figure since parting company with family friend and long-time business manager Asif Vali last year.