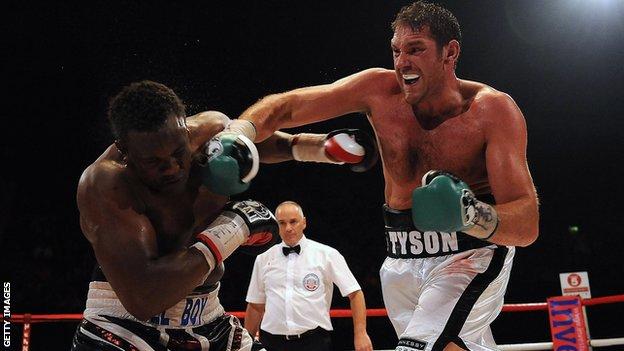 Dereck Chisora wants to send Tyson Fury "to the naughty corner" when they meet in their world title eliminator.

The British fighters meet in Manchester on 26 July, with the winner set to challenge IBF, WBA and WBO heavyweight champion Wladimir Klitschko.

Fury flipped over a table and goaded Chisora at a press conference promoting the fight in March.

"We are just going to chill out. I will just ignore him and then put him in the naughty corner," said Chisora.

Chisora was labelled "useless", "one-paced" and "a bum" by Fury in February after they had both won while fighting on the same bill in London.

Manchester-based Fury, 25, then threatened to knock out Chisora before storming out of a news conference held in his home city after their meeting was confirmed a month later.

Fury beat Chisora on points to become British and Commonwealth champion after a brutal encounter at Wembley Arena in London in July 2011.

"We know he swings a lot when he is in a panic. He has progressed and his jab is amazing, that is one of the keys for us but we have a better jab than him."

Chisora also revealed that he has a slight injury, but he remains optimistic that he will be ready for his rematch with Fury at the Manchester Arena.

"I'm not going to lie, I have got a problem with my hamstring which is why I haven't been in the gym, (but) everything is going well for me."