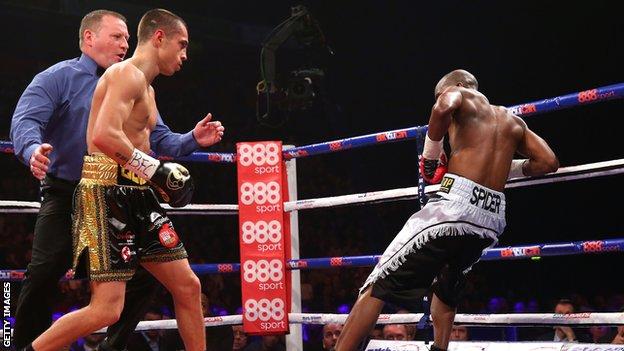 Scott Quigg successfully defended his WBA super-bantamweight title for the third time with a second-round stoppage of Tshifhiwa Munyai in Manchester.

The 25-year-old showed destructive power to twice floor his South African opponent before referee Howard Foster intervened with Munyai on the ropes.

Munyai was knocked down with a left hook in the first round before Quigg struck with a right in the second.

"He took the fight at late notice but I demolished him," Quigg told Sky Sports.

"I wanted to make a statement and I said you were going see the best of Scott Quigg," he added. "No-one has ever done that to Munyai."

Bury-born Quigg had been due to take on Nehomar Cermeno, but the Venezuelan withdrew from Saturday's bout because of visa problems.

In his first world title defence in October, Quigg fought a majority draw against Cuba's Yoandris Salinas, before seeing off the challenge of Diego Silva with a second round knockout in November.

In the other bouts at Phones4U Arena, Anthony Crolla saw off the challenge of fellow Mancunian John Murray to defend his WBO inter-continental lightweight title with a 10th-round stoppage.

Murray, who parted with Crolla's trainer Joe Gallagher after failing to claim the WBA lightweight title against Brandon Rios in 2011, had targeted the match-up with his close friend as he relaunches his career after a two-year absence.

After enjoying the better of the early stages, Murray's momentum slowed and Crolla's superior stamina and composure proved decisive as he landed several key blows before Murray was floored in the 10th round and the referee was forced to intervene moments later.

Earlier, Josh Warrington defended his Commonwealth featherweight against 33-year-old Rendall Munroe, who announced his retirement from boxing immediately after the seventh-round stoppage.