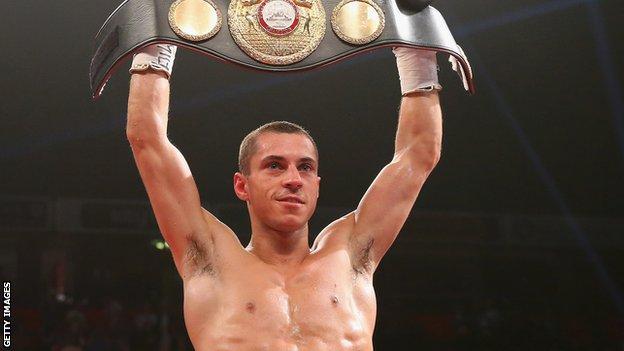 WBA champion Scott Quigg says he is keen to take on the other super-bantamweight world title holders and unify the division.

"I want to unify the division with fights with [IBF champion] Kiko Martinez or [WBC champion] Leo Santa Cruz, the other champions.

"The other name that always crops up is Carl Frampton. They're the fights that I want. I feel I'm ready for them."

Northern Ireland's Frampton, 27, is in line for a shot at Santa Cruz after beating Hugo Fidel Cazares in a title eliminator in Belfast earlier this month.

And the unbeaten Bury-born fighter is hopeful of organising a future contest at the town's football stadium.

"There's talk of that and hopefully that can happen in the summer," he added. "That would be amazing.

"I can't thank the local support enough. It would be so nice to be able to box at Gigg Lane and to have their full support behind me would be unbelievable."