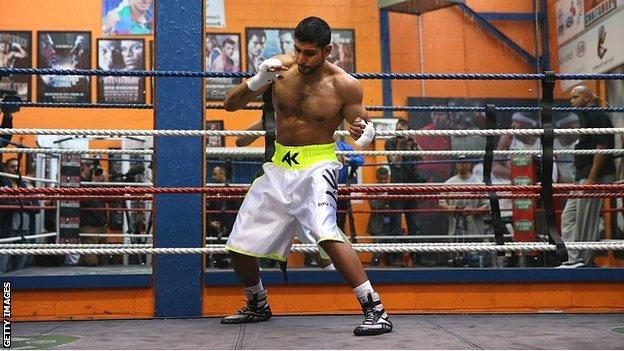 Amir Khan plans to look "sensational" against Luis Collazo in Las Vegas on 3 May, as he bids to lure Floyd Mayweather into a fight this autumn.

Britain's Khan, 27, is making his welterweight debut on the same bill as Mayweather versus Marcos Maidana.

American legend Mayweather chose to fight the Argentine over Khan, who has not fought for more than a year.

"The best thing I can do is put on a show, excite the public," said Khan. "That's what you can expect from me."

If I beat Amir Khan I have a bigger future in boxing and if I don't, I have to start from the bottom again. A win over Khan does put me in the Mayweather sweepstakes

Bolton's former two-weight world champion last fought in Sheffield in April of last year, when he came through a torrid fight against Mexico's Julio Diaz.

Khan turned down a fight against then IBF welterweight champion Devon Alexander last December to pursue a dream contest against Mayweather.

However, Mayweather claimed Maidana was chosen as his opponent via a public vote, leaving Khan in the lurch.

But Khan believes his extended break from the ring has allowed trainer Virgil Hunter to improve him as a boxer.

"You will see a different Amir Khan," said the fighter, who joined up with Hunter, who also trains super-middleweight king Andre Ward, in 2012.

"You will also see me much more comfortable at the weight. When I was at light-welter I was killing myself to make weight, it was like I was fighting myself as well as my opponents.

"They hit harder at 147lb but I will get that benefit as well because I won't be weakening myself. I should have moved up a while ago."

Collazo was narrowly outpointed by Britain's Ricky Hatton in 2006 and the American southpaw sees Khan as a make-or-break fight.

"This fight is my whole career right in front of me," said Collazo, 33. "If I beat Amir Khan I have a bigger future in boxing and if I don't, I have to start from the bottom again.

"A win over Khan does put me in the Mayweather sweepstakes. But I am not looking beyond Amir Khan. He is my main focus."