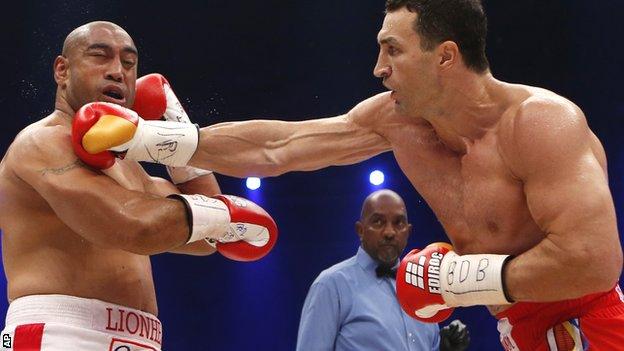 The Ukrainian, 38, scored a knock down after just over a minute in Oberhausen, Germany and was always in control.

April 2006: Beats Byrd for a second time to win the IBF & IBO titles

Australia's Leapai is known as a big puncher, but never got the chance to trouble the champion and the one-way traffic ended in in the fifth round.

He had beaten Denis Boystov in November to become the top WBO contender.

Leapai was aiming to be the first Australian to win the heavyweight title.

However, he started a vast underdog against the reigning WBA, IBF, WBO and IBO champion, who has won his last 19 bouts.

Leapai was regarded as likely to be little more than fodder.

But afterwards Klitschko said: "It wasn't easy. There are no easy opponents."

He added that the political turmoil in Ukraine made it hard to concentrate on training. "I hope things will be stabilised."

Leapai was once on the books of rugby league team North Queensland Cowboys before turning to boxing, boasting 24 knockouts from his 30 professional fights.

Klitschko is unbeaten since his 2004 loss to Lamon Brewster, with an 80% knockout rate from his 64 professional fights.