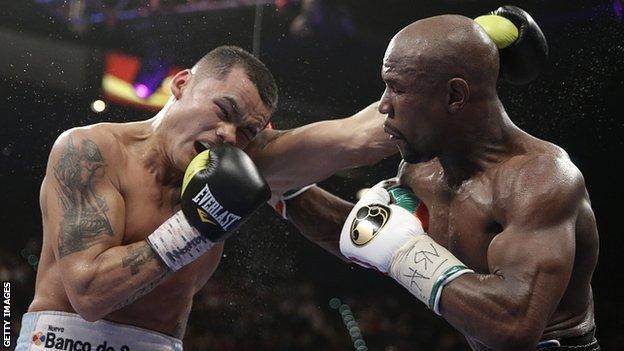 Mayweather, who is now the WBC and WBA champion, was the red hot favourite but Maidana showed tremendous commitment and dominated the early exchanges.

But having weathered the Argentine's thunderous start, American Mayweather assumed control in the middle rounds.

"It was a tough, competitive fight,'' said the 37-year-old Mayweather, who has now only stopped one opponent in seven years.

"I normally like to go out there and box and move. But he put pressure on me. I wanted to give the fans what they wanted to see so I stood and fought him.

"I couldn't see for two rounds after the (accidental) head butt (in round four). After I could see again it didn't bother me. That's what champions do, they survive and adjust."

Maidana, who hit Mayweather with more punches than anyone before, called for a rematch, saying: "I won the fight. He didn't fight like a man. He never hurt me with a punch, he wasn't that tough."

While judge Michael Pernick's card made it a majority rather than a unanimous decision, his verdict seemed greatly at odds with what had transpired.

And while Maidana insisted he had been cheated, five-weight world champion Mayweather was in a different class for most of the contest, landing with 54% of punches thrown.

The 30-year-old Maidana, who was outpointed by Britain's Amir Khan in 2010, started like a train, assailing Mayweather with a salvo of chopping right hands in the opening round and landing with some of them.

Mayweather found his range in the second, landing with a couple of cute right hands and sneaky left hooks as Maidana continued to march forward.

"Mayweather was pressured all the way by the battling Maidana.

"Mayweather's crisper punching made the difference, without ever quelling the Argentine's fire.

"The crowd howled at the end, but many of the punches thrown by Maidana hit Mayweather's arms or shoulders or missed the target altogether.

"Mayweather though was troubled more than he has been since he beat Oscar De la Hoya here seven years ago and a rematch is highly likely."

Maidana had Mayweather on the ropes again in the third and while the American was making most of his rival's punches miss, the Argentine was having some success to the body.

The roughhouse Maidana opened up a cut over Mayweather's right eye in the fourth, although it might have been caused by an accidental clash of heads rather than his fists.

And while Mayweather landed with a spiteful uppercut towards the end of the round, Maidana could well have edged it on superior work-rate.

Mayweather looked rattled on his stool before the start of the fifth, complaining that he was unable to see because of blood trickling into his right eye.

And Maidana landed with a wicked right midway through the fifth as Mayweather continued to look strangely confounded.

However, Mayweather landed with some classy shots in round six, including a wicked right uppercut and a peach of a right cross.

And round seven was confirmation that the tide had turned for good, with Maidana showing less intensity and Mayweather landing with some crisp shots.

Maidana found a second wind in the eighth, roughing his rival up on the ropes and possibly trumping Mayweather's classier, but less frequent, shots on the counter.

Mayweather finished the ninth round strongly, snapping Maidana's head back with a couple of overhand rights and stopping him in his tracks with a right to the body.

Maidana showed real signs of tiredness in the 10th and Mayweather took advantage, strafing his opponent with looping rights to the head and body and he continued to land the cleaner shots in the penultimate round as Maidana's work began to look a little desperate.

Maidana came on strong in the final round but Mayweather had already done more than enough to win the fight.

Maidana, meanwhile, has 35 wins and four losses from 39 pro fights and remains a major player in and around the 147lb division.

Mayweather, who earned $32m (£19m) for his latest contest, has three fights left on his contract with American television network Showtime and will fight next in September.

That probably rules out Khan - who outclassed Luis Collazo on the undercard - whose Muslim faith means he will only finish the fasting period of Ramadan in late July.

On the undercard, Adrien Broner bounced back from his defeat by Maidana last December with a unanimous points victory over fellow American Carlos Molina.

The win for the 24-year-old, who has 28 wins and one defeat from 30 fights, puts him back in the frame as a future Mayweather opponent.