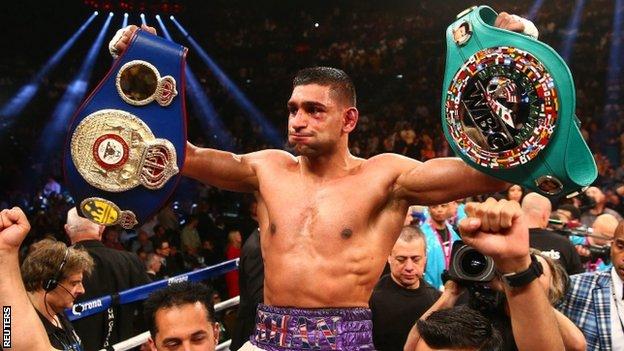 "Brook-Porter is not going to happen because Kell doesn't think he can win it," Khan told BBC Sport.

"I don't think Kell has got the bottle to take a big fight like that - he's always been all talk when it comes to the big fights," Khan said. "Some fighters are like that."

The 26-year-old Porter, who is unbeaten in 25 pro fights, stopped Malignaggi in four rounds.

Malignaggi, whom Khan stopped in 2010, was knocked down twice by Porter and needed treatment in hospital after the fight.

Last year, Brook, 28, had three dates against then IBF champion Devon Alexander cancelled because of injuries to both boxers. Alexander lost his belt to Porter last December.

But he is unlikely to challenge five-weight world champion Mayweather later this year because the American legend usually fights in September, which is too close to the end of the Muslim fasting period of Ramadan for Khan.

However, Mayweather is visiting Britain in June and Khan hopes the fact he now shares the same adviser - the influential Al Haymon - will bring his dream fight closer to fruition.

"But Al Haymon really believes the fight is something Floyd wants. Having him on the team definitely makes the fight more of a possibility."

Khan is expected back in the ring in November or December, with Alexander and former Mayweather victim Robert Guerrero possible opponents.