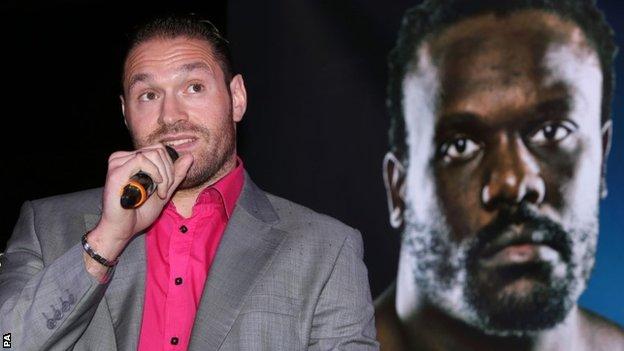 Tyson Fury will give Dereck Chisora the British and European title belts as gifts if Fury wins their 26 July bout.

Fury, 25, will meet the fellow Briton in Manchester with the winner hoping to fight Wladimir Klitschko for the IBF, WBA and WBO heavyweight crowns.

"After I beat Chisora, I'm going to give him them titles back as a present because really and truthfully I'm above that level," he told BBC Radio 5 live.

"Having a belt to prove [I'm Britain's best fighter] doesn't mean anything."

Chisora, 30, who holds the European title, was beaten on points by Fury the last time they met in 2011. The British title is currently vacant.

Meanwhile, Fury does not believe Ukrainian world champion Klitschko will face him, even if he defeats Chisora.

"I'm looking forward to fighting Chisora, getting him out of the way and then fighting Klitschko for all the belts, but I don't think Wladimir is going to take the fight," added Fury.

"I think he's going to retire or vacate the title. I'm the mandatory challenger for the title after I beat Chisora. I have been informed that I'm in the line to face new WBC champion Bermane Stiverne for a voluntary defence.

"If that comes along in the meantime, I would be taking that fight."

Fury also dismissed those who had abused him because of his Irish Traveller background.

"The world is a very racist world we live in," he added.

"It's uneducated people. Racism is a sign of ignorance in my opinion. It's people who haven't been anywhere, haven't seen the world.

"If anyone wants to abuse other people for whatever colour, race or creed they are then it's just stupidness isn't it?"