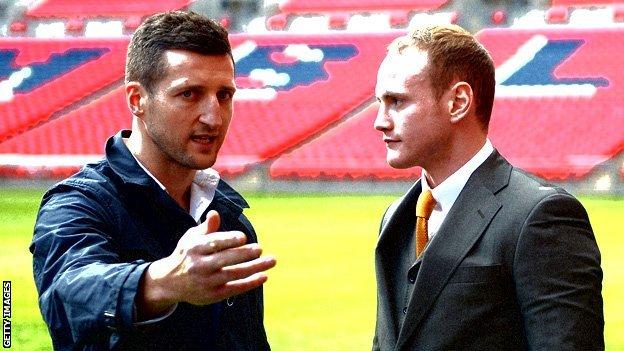 Those two blokes blasting chunks out of each other in that ring - they hate each other, right? Actually, hardly ever. But things will be different at Wembley Stadium on Saturday, because Carl Froch and George Groves genuinely don't get on.

Nottingham's Froch, 36, won their first encounter on a controversial stoppage last November. Londoner Groves, 26, thought he was robbed. The rematch, for Froch's WBA and IBF super-middleweight belts, is sure to be brimming with spite.

But here's the wicked irony: for as long as the fight lasts, these two bitter rivals will share more in common with each other than any other two people on the planet. Just those two, the referee, and 80,000 wonderful boxing fans, out there in the dark.

As a taster for one of the biggest British match-ups in history, BBC Sport examines what divides and unites the protagonists.

Where the first fight went wrong

Groves knocked Froch down in the first round in Manchester and dominated the first half of the fight, only for Froch to come roaring back and stop his rival. Most observers felt referee Howard Foster stepped in too soon. Here, apparently, is why it panned out like it did...

Carl Froch: I took George Groves lightly and almost paid severely. I got a little bit comfortable at home with my partner and two kids. I couldn't really be bothered, I wasn't really motivated to do what I needed to do to perform.

Maybe I didn't give George Groves enough respect. I listened to too many people, telling me he's not in my league, he's not fought anyone, he's got no chance. I started to believe it, which was unprofessional.

George Groves: Howard Foster made a terrible decision and I felt wronged and robbed. We felt he was possibly influenced by the build-up to the fight and the occasion.

During the build-up, I was billed in the media as this guy who can't go 12 rounds, who's out of his depth. They said that when Carl Froch landed a shot on me, I was going to get stopped. I was a victim of all of that.

Where the first fight went right

An awful lot of boxing history is revisionist. Indeed, sometimes in boxing you get two versions of the same story that diverge so wildly you wonder whether either of the storytellers was there at all. But pick through the smoke and the carnage and usually you'll be able to work out the truth...

Carl Froch: I came through a torrid time in the first round and the first four or five rounds were as bad as I've been as a professional. But I turned things round and finished the job in round nine, snatching victory from the jaws of defeat.

I couldn't have performed any worse in the first fight and I don't think he can pull out another performance like that. The moment I started to push him back, he was in serious trouble. He knows he was hurt and on shaky legs when he got stopped and there was still another 10 minutes of fighting to go.

George Groves: Everyone talks about the first round, when Carl got dropped, but round six was probably the worst round that Carl has ever had. He likes to talk about round six as a turning point, but I was still going about my business in the seventh and eighth and he was still getting hurt in the ninth.

We're starting the second fight from that sixth round - whatever he felt in that sixth round he should expect that from the start. We did well in the first fight but that was a fraction of the performance I'm going to put on him this time.

Gaining a mental edge for the rematch

Some people wonder why boxers bother with the mind games and the trash-talk. But imagine the strain of fighting perhaps only twice a year, as elite boxers often do; the strain of marshalling mind and body so that - with a bit of luck - it all comes together when it counts.

Because if it all goes wrong that could be your title gone, a zero dropped from your next purse, your career in jeopardy, your health not what it was. No wonder boxers strive for every extra edge they can get...

Carl Froch: All the talk and nonsense, it's not an act, although there is an element of pantomime. We've not got together and said: 'Let's push each other about and insult each other.' It happened naturally, we just don't get on.

I make no secret about seeing a psychologist. Psychology isn't a weakness. It's nice to be able to understand why I got wound up before the first fight, by his disrespect and arrogance. I let it get under my skin and that cannot happen this time. This time I'm so relaxed about it, this kid cannot wind me up again.

People tell me I've seen him off, made him look like a stuttering little boy. But all the talk and nonsense doesn't mean a great deal, I'm just not interested.

George Groves: I don't know what Carl Froch is hoping to achieve by seeing a psychologist now. He's spoken so much about how successful his career has been and how great he is and yet he can't cope with me.

If he's seeing a sports psychologist about me, he's got to admit that he's got a problem with me and he's got to try to fix that problem. But he hasn't had the time to get his confidence back after what happened in the first fight.

And I'd imagine talking things over with a psychologist can be very taxing. Sometimes my missus wants to have a deep conversation and it's hard to do after a hard day's training. Sometimes she talks about wanting to get a puppy and I find myself thinking: "Whoa, let's do this another time."

Rights and wrongs of preparing for mayhem

Sportspeople get it wrong all the time. The timing was out, the tactics were wonky, I didn't feel quite right, I'll get them next time. Next week. Next month. Whenever. For an elite boxer, there usually is no next time.

One mistake and that could be it - wrong gym, wrong sparring, wrong advice, too much time with the kids. This is it, got to get it right...

Carl Froch: This time I've stayed away from home and got stuck in down the gym - five days in Sheffield, two days back at home with my family in Nottingham. I'm more mentally focused and switched on, not cutting corners, more precise.

Walking out into a stadium filled with 80,000 people, soaking it all in, there will be a lot of pressure. But I won't fold. I will relish it and enjoy it and that will be the difference. Cometh the hour, cometh the man.

George Groves: I've been training at Dale Youth, my old amateur club in west London, which is like a second home to me. Carl trains up at Sheffield, with the GB amateur squad. It's a soulless place, it belongs to no-one.

Maybe he thinks it's making him tough, staying away from home five days a week. But if you're fragile enough to have to see a psychologist, the last place you want to be is away from home.

You can go into cave man mode, suppress your feelings and just go about your business. But feelings will emerge on fight night and you've got to somehow contain them.

He's going to be experiencing an awful lot of new things on fight night - fighting in front of 80,000 people, away from home, against a hostile crowd, against a guy he can't beat. I wouldn't want to be in his place.

How the rematch will be won. Or not

Most boxers fancy themselves as clairvoyants before a fight. Which doesn't make them cranks. So pumped full of inner strength do they need to be that they honestly believe every word that passes their lips.

What's the alternative? Admitting you don't punch hard enough? You're not quick enough? Not tough enough? Too green? Over the edge and careering down a cliff? Might as well throw in the towel now...

Carl Froch: I gave him the advantage in the first fight, allowed him to get comfortable and let his shots go. I won't be taking a backward step in this fight. George, you're getting stopped and you're potentially getting hurt.

I'm looking at doing some serious business on him. Without going into details and getting into trouble, we all know what that means, and it's bad news for George Groves

I will make it an intense, heated battle. I'm going to take the centre of the ring and I want him stood there with me having a fight because there's only going to be one winner. The sooner we meet, the sooner the fight's over in my favour.

The referee isn't going to jump in this time because of all the noise he made after the first fight. Be careful what you whinge for. I'm looking at doing some serious business on him. Without going into details and getting into trouble, we all know what that means, and it's bad news for George Groves.

George Groves: The pressure is not to beat Carl Froch, because I can do that every week. I want to set the place alight on fight night and for those 80,000 fans to leave Wembley Stadium thinking: "What a performance."

If I perform like I've been performing in the gym, it might not even be a fight. And if I want it to be like Hagler-Hearns, I can make it like that because I can beat Carl for hand-speed, foot-speed and I can hurt him.

Hear from both Froch and Groves, plus promoter Eddie Hearn, former world super-middleweight champion Richie Woodhall and boxing correspondent Mike Costello, ahead of Saturday's fight by downloading the latest podcast on the Radio 5 live programmes page.