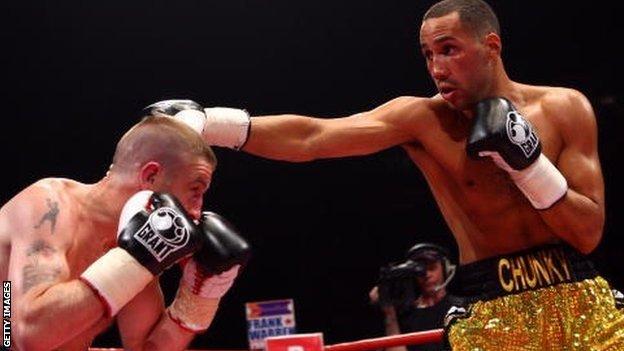 Britain's former Olympic champion James DeGale says a win over American Brandon Gonzales this weekend will put him "back in the big time".

The winner of Saturday's IBF super-middleweight title eliminator will face Carl Froch or George Groves, whose rematch tops the bill at Wembley.

"You could say I've become the forgotten man the last couple of years," said DeGale.

"But I'm in a fantastic position now. I win this and I'm back in the big time."

The Londoner has found himself fighting in small halls for much of the past two years but recently ended his association with promoter Mick Hennessy, who had offered him a platform fighting on Channel 5, to sign with rival Eddie Hearn.

The 2008 Olympic middleweight champion has one defeat from 19 professional fights, with 12 knockouts, while Gonzalez, 29, is unbeaten in 18 fights, with 10 knockouts.

"It could be a win-win night for me because obviously if I win this fight then I box the winner of Froch v Groves," added DeGale, 28.

"The winner has to meet me within 120 days but I've got my own fight to deal with before that on Saturday. Brandon Gonzales is a good fighter, an unbeaten, confident American who is coming here thinking he's going to win.

"I'm in for a hard night's work but I'm feeling confident and just can't wait to do the business."

DeGale's only professional defeat came against long-time rival Groves in 2011 and, should his fellow Londoner beat Froch on Saturday, the pair will clash again.

"Froch v Groves will be a close one," he said. "I'm sitting on the fence but with a gun to my head I'd probably go with Groves."