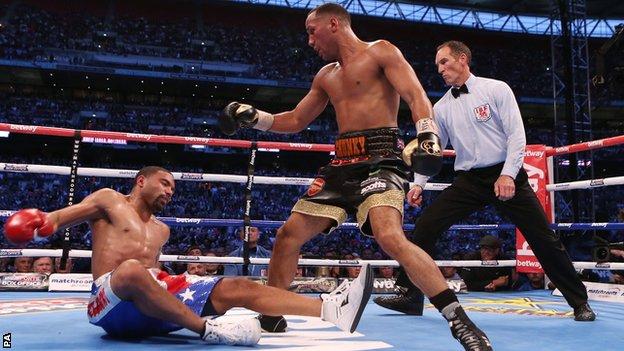 Britain's James DeGale stopped Brandon Gonzales in the fourth round to win the IBF super-middleweight final eliminator and set up a potential world title fight with Carl Froch.

Gonzales appeared to regain his composure, but after DeGale landed with another punch, the fight was stopped.

The 28-year-old knocked out Tabtimdaeng Na Rachawat in the 10th round at Wembley with a sharp left hook.

McDonnell, who has won 24 of his 27 fights, held the IBF bantamweight title last year, but was stripped of the belt for a contractual breach.

Dagenham fighter Kevin Mitchell beat Ghislain Maduma with a late stoppage, but will not get the chance to fight Miguel Vasquez for the IBF world lightweight belt after breaching maximum weight rules.

Mitchell, 29, initially struggled with Maduma's speed but started to take control as the latter tired and scored two official knockdowns in the 11th round, the second of which prompted the referee to stop the fight.

Joshua knocked down his 38-year-old compatriot with a right uppercut after just 83 seconds of their heavyweight fight.