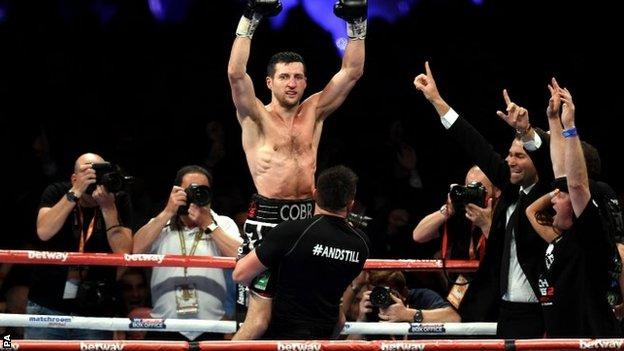 Carl Froch says he could have three or four more fights in him after ending George Groves's challenge for his IBF and WBA super-middleweight titles with the "best punch" he has ever thrown.

The 36-year-old floored his fellow Briton with a huge right hand in the eighth round of their rematch in front of 80,000 fans at Wembley on Saturday.

"If George Groves wanted to be forgiven for his mistakes he should have taken up tennis. Miscalculate on Centre Court and you might just lose a point. Miscalculate between the ropes and you're unconscious on the canvas."

Read more from Ben Dirs: One great punch, one mistake, one wild night

"If I bowed out now I could say that was my finest hour, my finest right hand," Froch told BBC Radio 5 live.

Speaking on 5 live's Sportsweek programme, the Nottingham fighter added: "I could have three or four more fights - but If I decide after I've been on holiday I've had enough, don't be surprised.

"The one thing I haven't done is to fight in Las Vegas. That would get me up to remain in this sport. I wouldn't say it is Vegas or bust - it is close to that.

"[Promoter] Eddie Hearn does magical things. There are a couple of options but all I want to do at the minute is relax with my family and have a nice summer. I'm not making any decisions now."

Froch produced a devastating finish to claim a 33rd win from 35 fights after seven cagey rounds during which both he and Groves had probed patiently for an opening.

As Londoner Groves started to tire and the fight became more open, Froch took his opportunity.

British super-middleweight champion Paul Smith Jr: What a knockout. Pure elation for Froch & Heartbreak for Groves. Boxing is a cruel game. What an event!

"I had to take my time," he said. "And in the end he had his leg wrapped around himself and it was a sorry sight for him.

"He came in very confident, probably over-confident. I think it was a little bit like a deer in the headlights."

Groves, 26, was magnanimous in defeat, congratulating Froch before insisting he would return stronger for the experience.

"It's boxing and fair play to Carl - he caught me and I went down," he said.

"I've got to hold my hands up - Carl caught me with a shot, but I'll come back bigger, better and stronger.

"Ultimately I feel like I let myself down but congratulations to Carl. Fair play, he got the punch." 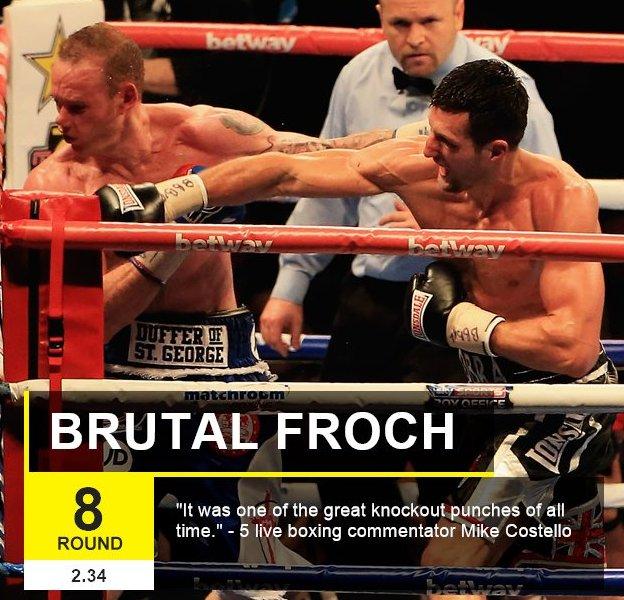