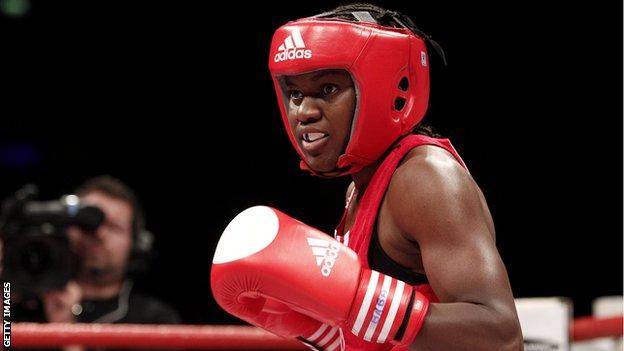 Olympic champion Nicola Adams has been beaten at the European Women's Boxing Championships in Bucharest.

The defeat by Bulgarian Stoyka Petrova in the quarter-finals was the 31-year-old's first in more than two years.

Fellow Briton Natasha Jonas is guaranteed a bronze medal after victory over Valentina Alberti in the light-welterweight division.

"Although I was not at my best today I felt I had done enough to go through, however sometimes the judges just do not see it your way," said Adams, whose defeat on points was a unanimous decision.

"It was a close bout and unfortunately it did not go for me today.

"The most important thing is to come back stronger than ever and my priority now is to make sure I am in the best possible condition for the Commonwealth Games and the World Championships later in the year."

Despite making a slow start to her quarter-final fight, Adams, from Leeds, looked to have finished the stronger in rounds three and four but all three judges gave the win to Petrova.

Liverpool's Jonas, who made history in 2012 as the first female Briton to win an Olympic boxing match, added: "I feel like I am starting to get my best form back now after a mixed start to the year.

"It is great to have secured another major medal, however the competition is still on-going so I am just focusing on my next bout and ensuring I go as far as possible in this tournament."