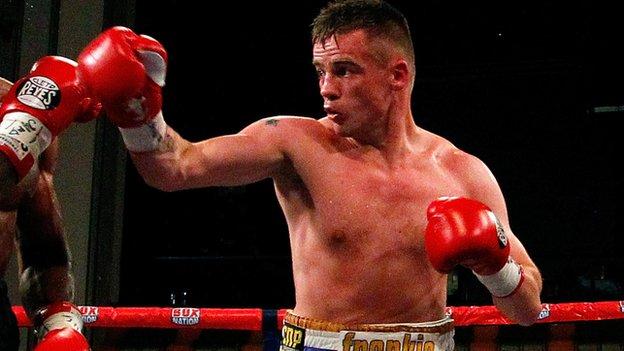 Birmingham boxer Frankie Gavin is to challenge for the European welterweight title in the West Midlands when he fights reigning champion Leonard Bundu.

The undefeated British and Commonwealth champion, 28, will meet Bundu at Wolverhampton Civic Hall on 1 August.

Former world amateur champion Gavin took his unbeaten record to 19 wins in his last fight in Newcastle in March.

Putting his Commonwealth crown on the line for the third time, he outclassed Namibian Sacky Shikukutu.

Italian Bundu is unbeaten in 32 fights since representing his country at the 2000 Olympics - eight years before fellow Olympian Gavin fought in a Great Britain vest in Beijing.

He has made five successful defences of the European title he won in November 2011, the last of them against Essex fighter Lee Purdy, who he stopped in the final round.

"He beat Purdy in a tough hard fight over here so he'll have no second thoughts about fighting me in front of my home crowd in Birmingham," said Gavin.

He'll have my full respect and I'm preparing for a hard 12 rounds. He's a good fighter and I'd be stupid to underestimate him.

"Bundu's got good fitness for 39, but he's not like was when he was 30 and you don't know how much the Purdy fight took out of him. I'm not 30 yet and I believe I'll have the advantage as I'm younger and fresher,

"All I'm focused on right now is beating Bundu and achieving my dream of winning the European belt that I've dreamt about since I was a kid. I've won the British and Commonwealth titles, but winning the European title and holding all three belts like the great British fighters in the past will be a fantastic achievement."