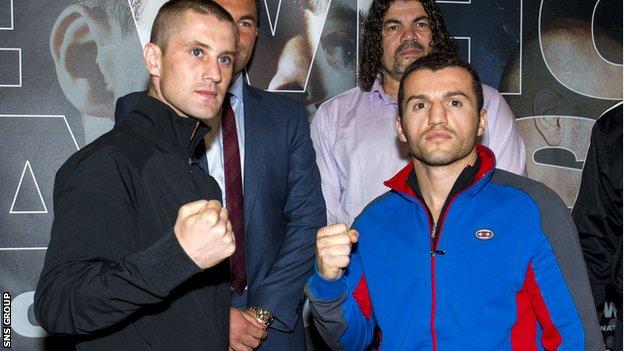 Ricky Burns insists he has given no thought to retiring as he prepares for Friday's WBC eliminator against Dejan Zlaticanin at the Braehead Arena.

The 31-year-old makes his comeback after losing his WBO lightweight title to Terence Crawford in March.

Promoter Eddie Hearn has suggested this is a "make or break" fight for Burns.

But the Scot said: "I was gutted to lose my title but it's not changed my attitude to boxing one bit. It's my job and I do what I need to do."

Since being beaten in a one-sided contest against Crawford, Burns has left his Lanarkshire base to join up with trainer Tony Sims in Essex.

And he is confident the change in approach will help against the stocky Montenegrin challenger, who is undefeated in 18 bouts but largely unknown outside the Balkans.

"He's a southpaw, he likes to come forward," Burns told BBC Scotland. "He's a big puncher and I'll need to give him the respect he deserves.

"We're expecting a tough fight but I couldn't be happier with the way training has gone.

"I've been based down south for the last 10 weeks, things have been going well and I'm just looking forward to climbing back through those ropes.

"I've been working on changing little things with Tony and it's been coming together."

Hearn has a meeting with WBC lightweight champion Omar Figueroa in his sights should Burns win, but the Scot insists his focus is solely on Zlaticanin.

"I don't like to look beyond my next fight," he said. "Hopefully it all goes well and this gives me a high ranking with the WBC.

"Firstly, I need to put in a good performance and get the win, then we can sit down and talk about the next move."