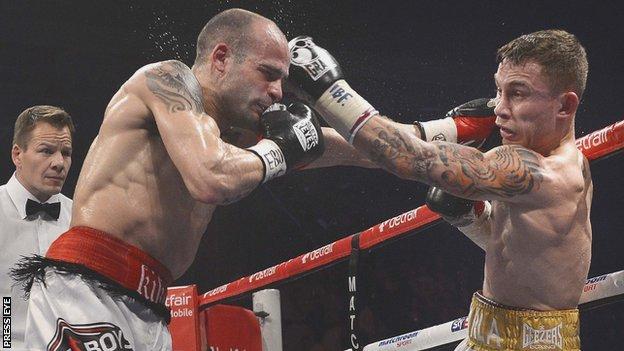 The fight will take place in a purpose-built temporary arena holding 16,000, meaning it will attract Northern Ireland's biggest ever boxing crowd.

Frampton defeated the Spaniard in his home city of Belfast in 2013 to win the European super-bantamweight title.

However, Martinez went on to win the IBF world title later in the year.

I hope it's fiery. Martinez has been saying a lot on Twitter, but let's see if he is like that when he comes over

Ravenhill, home to the Ulster rugby union team, the regenerated Maze and Balmoral Showgrounds were all mooted as potential venues.

But Frampton's manager and promoter Barry McGuigan said staging a fight at the Titanic Quarter, a large waterfront regeneration project in the Northern Irish capital, would be "breaking new ground".

"There is potential on the Titanic site for a 25,000-30,000 capacity arena, and that is something we are looking at," said former featherweight world champion McGuigan.

The 27-year-old Frampton has won all 18 of his fights since turning professional in 2009.

He stopped Martinez in the ninth round of their contest at Belfast's Odyssey Arena 17 months ago, withstanding a strong challenge before flooring the Spaniard late in the fight.

"I hope it's fiery. He has been saying a lot on Twitter, but let's see if he is like that when he comes over," said Frampton.

"He's already been knocked out, so he can't be too brash because he will look foolish."

Martinez, 28, won the IBF title by defeating Jonathan Romero six months after his defeat by Frampton and has made successful defences against Jeffrey Mathebula and Hozumi Hasegawa.