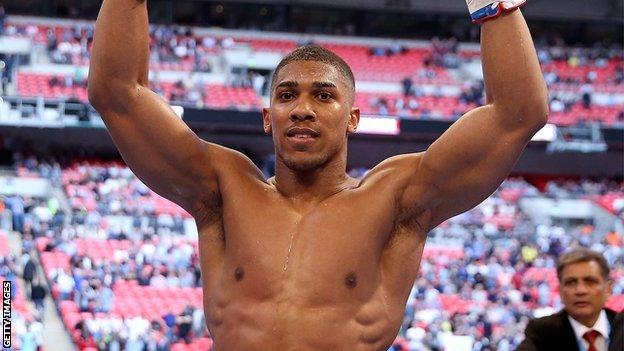 Matt Skelton has vowed to derail the promising heavyweight career of Olympic champion Anthony Joshua when they fight in Liverpool on Saturday.

Skelton, 47, has warned Joshua that he could go the same way as 2000 Olympic champion Audley Harrison, who has been found wanting in the paid ranks.

Joshua, 24, has won his first six fights since turning professional.

"I am not going to Liverpool to lay down and take a pay-cheque, that's not in my make-up, I am not all about money."

Skelton is 23 years older than Joshua, has had 36 professional fights and unsuccessfully challenged for a world title in 2008.

He lost his last contest against fellow English veteran John McDermott in March and was knocked out in two rounds by former Olympic bronze medallist David Price in 2012.

"I am not going to kid myself, they want him to win and they see this as a fight he will win and build upon," said Bedford's Skelton.

"But heavyweight boxing is a risky business, one punch can change everything."

Harrison won super-heavyweight gold in Sydney and clinched the European title as a professional, but failed to perform at the highest level, losing seven of his 38 bouts.

He lost in the third round of a poor WBA world title fight against Britain's David Haye and was also knocked out inside 90 seconds against both Price and American Deontay Wilder.

Joshua, who has won all of his professional bouts inside the distance, fights Skelton on the same Echo Arena bill as cruiserweight rivals Tony Bellew and Nathan Cleverly, who fight Julio Cesar dos Santos and Alejandro Valori respectively.

Super-middleweight prospects Rocky Fielding and Callum Smith look to add to their unbeaten records with fights against Noe Gonzalez Alcoba and Vladine Biosse.

Callum's older brother Stephen, who hopes to fight for a world title later this year, keeps busy with an eight-round bout.