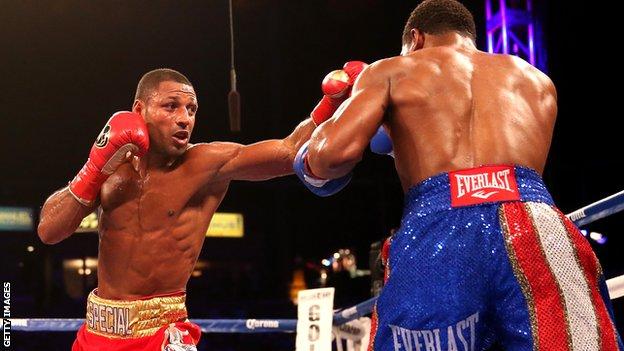 Brook, 28, won the bout on a majority decision to earn his first world title in his second fight outside of Britain.

The rugged Porter started strongly but Sheffield's Brook worked his way back into the fight and produced the more accomplished performance.

"I looked scrappy but did what I had to do," said Brook, who remains unbeaten.

Brook has 33 wins from as many fights and his victory could set up a potential fight with fellow Briton Amir Khan.

"The British public want it," added Brook, speaking to Sky Sports. "He'll probably say that I need to win another title for the fight.

"I know he doesn't like me. The fact is, he is getting it. I'm the champ of the world."

"I'm up for it. I think I'd like that in somewhere like Wembley Stadium, we can fill that out, that would be a quick sell.

"It's the fight that the UK fans want to see and have been talking about for such a long time."

Porter, 26, had showed the greater work-rate in the early stages, with his busy style not allowing his rival to get into any sort of rhythm.

The Briton sustained a cut to his left eye at the end of the second round after being caught by the American's head in one of the many clinches in the fight, although he was never really troubled by the home favourite.

Porter also suffered a cut after another clash of heads and started to show signs of tiredness at the halfway stage of the 12-round contest.

Brook, whose jab was working particularly well, took advantage of the fading Porter by landing the cleaner punches, especially an uppercut in the seventh.

He imposed himself the longer the fight progressed and finished the stronger.

On the undercard, there were wins for fellow Britons Callum Smith and Luke Campbell.

Super-middleweight Smith was a first round winner over Abraham Hernandez, while Campbell won his lightweight contest against Steve Trumble with a second-round stoppage.

Omar Figueroa also stopped Daniel Estrada in the ninth round to defend his WBC lightweight title belt, while Anthony Dirrell won a rematch against Sakio Bika to claim the WBC super middleweight.