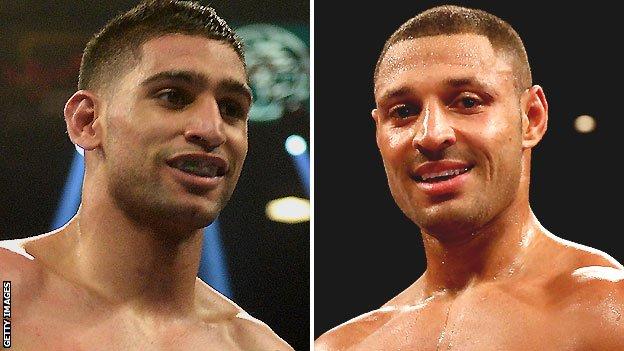 Kell Brook has targeted a fight against Amir Khan after becoming the IBF welterweight champion by beating Shawn Porter.

The victory on points gave Sheffield's Brook, 28, his first title and he is unbeaten with 33 wins.

"I know Khan doesn't like me. The fact is, he is getting it. I'm the champ of the world," said Brook.

"If the fight can happen, let's make it happen," said Khan, who has 29 wins and three defeats from 32 fights.

Khan is looking to line up a bout with Devon Alexander or Robert Guerrero in England before the end of the year.

The Bolton boxer said he needs a 'tickover fight' as a warm-up to a possible fight with Manny Pacquiao or Floyd Mayweather next year, but Brook's name could now enter the fray.

"The British public want it," said Brook, speaking to Sky Sports. "He'll probably say that I need to win another title for the fight."

But, speaking to BBC Radio 5 live, Khan added: "I'm up for it. I think I'd like that in somewhere like Wembley Stadium, we can fill that out, that would be a quick sell.

"It's the fight that the UK fans want to see and have been talking about for such a long time."