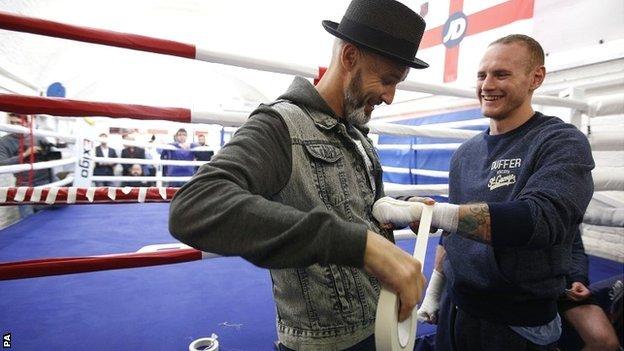 It is a warm, sunny afternoon in Hammersmith, west London, and under the arches as the District Line train rumbles overhead, George Groves is going through the motions for the watching media.

On one side of his tightly-packed gym in the area he grew up in is a wood craftsmen's workshop; on the other an advertising agency. Inside there are white-washed brick walls and brand new equipment as Groves gloves up with trainer Paddy Fitzpatrick.

Groves's mum, Yvonne, explains how it was built with the money earned from the first world-title fight with Carl Froch and how the family turned a grotty space into a gleaming temple where George can prepare for his WBC world super-middleweight title eliminator against Christopher Rebrasse at Wembley Arena this Saturday.

The fact she is serving tea and sandwiches reflects the tight-knit family unit that surrounds Groves. He has spoken previously of how he helps his wife Sophie while she is teaching at a primary school. However tough he is in the boxing world, it's his partner who rules at home.

When I ask Yvonne how she deals with watching her 26-year-old son fight, her winced response is telling.

'Earn the money and get out' is how she sees the ideal career path for her son. And in a revealing interview before he hits the pads, Groves hints at a similar philosophy.

Groves calls his approach to boxing as "maverick" and in many senses it is true. Following the controversial stoppage in his first fight against Froch, Groves said he trusted no-one and decided to manage himself.

So when he played the goat in the build-up to his record-breaking re-match against Froch in May, he wasn't just trying to wind up his opponent, which appeared to work. The businessman in him also had a greater appreciation of the need to sell 80,000 tickets at Wembley Stadium.

Similarly, he understands what is at stake this time around, adding to a more humble tone.

Lose this fight and his chances of facing Froch again would fade away. More importantly, it would also ensure that the shortcut to retirement would take a serious detour.

"Boxing is a sport but it's a business," the former British and Commonwealth champion says. "It's a business with a shelf-life and, like a woman waiting to have kids, my clock is ticking. A career only lasts so long and a successful one is even shorter.

"I've had a successful career but I'm not the sort of fella who is content with anything and certainly not in boxing. I look forward to that day, because I will retire but until that point I will strive to be better and try and understand the sport as best I can."

Groves talks intelligently, a man who now understands the boxing ring and the boardroom.

"I don't just follow the trend," he adds. "I signed with a German promoter and they don't usually promote here in the UK, but the fact they have identified me as a talented enough fighter means I am able to put my stamp on the show and we are breaking moulds."

The Londoner is the only fighter not backed by promoters Eddie or Barry Hearn to have his fight screened on Sky. Yet he is wily enough to know that if he doesn't beat Rebrasse to the European title, that could soon change.

The Frenchman has only lost two of 27 bouts but has only won six inside the distance so it could be a war of attrition in front of the expected 7,500 fans in north-west London. Groves acknowledges it won't be easy.

"We knew this would be a bit of a comedown after the Carl Froch fight, that made history," Groves says. "But this is a huge fight for a European belt and then we are in line for the WBC title.

"This is more important than any other fight that I've had. Every fight feels like a must-win but with this, the pressure is really on. You can always recover a career but I lost my last fight and if I lose this one there will be some serious things that need addressing."

Despite losing his last two world-title fights to Froch, Groves insists he has not suffered a dent in confidence.

Many fans disagreed with how the first bout ended, while he was floored by Froch's "finest right hand" in the re-match.

Groves believes he belongs at world-class level and takes further solace that despite being "the little guy" in the Froch encounters, there was a still a demand to screen his comeback.

Should he beat the Frenchman, American Antony Dirrell lies in wait although the savvy businessman in Groves knows where the real pay days are.

Right now, a re-match with Froch or James DeGale, who Groves beat in 2011, seems a long way off yet he knows that those contests will once again capture the imagination.

Throughout our chat, Groves is softly-spoken and thoughtful. He becomes more animated, though, when I bring up the prospect of those bouts. He knows the game, so he starts to play it.

"The fans have already seen both fights and if they knew there was a third one, they would cry out to see it," he explains. "The same with DeGale, he is always there or thereabouts. If he is winning and I am winning, then our paths will collide. It's a fight I would take any day of the week.

"If Carl wants to fight in Vegas, I'll fight him in Vegas. If he wants to fight in Nottingham, I will. Certainly, there will be a temptation to fight me because he doesn't like me. For whatever reason, he's struggling with the win and I feel that will lead to the possibility of a third fight.

"He probably knows that he couldn't win third time lucky but we shall see. The headlines of the last two fights say that he won, but that wasn't the whole story."

Groves, 26, does not see himself boxing at Froch's age, 37. He wants to be in control, choosing his destiny and engaging in the circus that surrounds boxing in order to secure his future. But he knows that only success can allow him to pick his own exit point.

As our interview finishes, I ask him what training he will be doing this week. "Exercising my tongue," he says with a grin.

Should he lose on Saturday, talk of Froch re-matches will begin to fall on deaf ears.