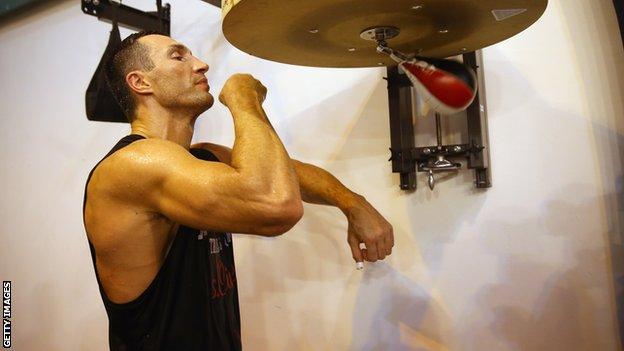 Wladimir Klitschko says Britain's Olympic champion Anthony Joshua has all the necessary attributes to thrive in the heavyweight division.

Klitschko, who defends his WBA, IBF and WBO heavyweight titles against unbeaten Bulgarian Kubrat Pulev in Hamburg on Saturday, recently sparred with Joshua.

Joshua, 25, has won his first nine professional fights by knockout.

"He's built how a champion should be, is the right weight, very strong and technically capable," said Klitschko.

"He's also very down to earth and asks a lot of questions - that shows the man wants to learn. He has a good future if he keeps doing what he's been doing."

Joshua sparred 15 rounds with Klitschko in August and the Londoner's next fight is against former British and European champion Michael Sprott in Liverpool on 22 November.

Since regaining a portion of the world title in 2006, the 38-year-old Klitschko has made 16 defences and rarely been tested.

However, the Ukrainian said he took it as a compliment when critics called him a boring fighter.

"When people say my competition is weak and my fights are one-sided, it means I've done my job very well," Klitschko told BBC World Service.

The 33-year-old Pulev has had 20 professional fights and won 11 of them inside the distance.