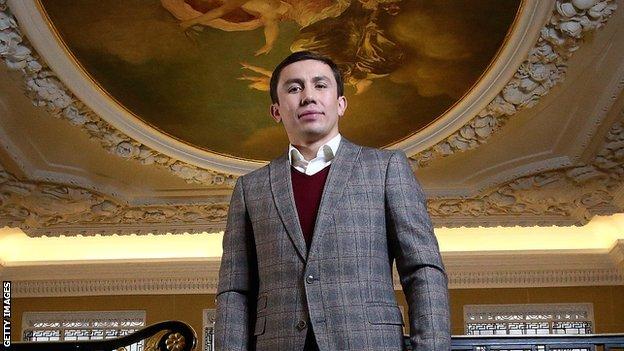 Gennady Golovkin looks like a giant child in his wide check suit. Dressed up by his proud mum. A V-neck sweater for warmth, a sensible haircut, all topped off with a goofy grin. But this giant child might just be the most dangerous man in boxing.

Golovkin, the WBA middleweight champion, can chop men down from all angles. He's being doing it since he was a kid, when his two older brothers would goad him into fights with tanked-up miners on the streets of Karaganda.

In the Soviet era, Karaganda, Kazakhstan's fourth largest city, was a darkly comic synonym for "back of beyond". If Karaganda is famous for anything, it is for labour camps and coal. It is the sort of place where you wake up to hear the birds coughing.

Situated on the vast Kazakh steppe, it gets hot and sticky in summer and brutally cold in winter. People are tough in Karaganda. The miners especially.

Since turning pro in 2006, Golovkin has finished 28 of his 31 opponents inside the distance. His 90% knockout ratio is the highest of any middleweight world champion in history. Martin Murray of St Helens, who challenges Golovkin in Monte Carlo on Saturday, can expect to be hit like he's never been hit. He will have seen the footage.

Last October, Marco Antonio Rubio was finished by a looping left hook to the top of the head. Australia's Daniel Geale fell victim to a sweeping right cross, which Golovkin delivered while reeling on the back foot. Another right hand knocked Japan's Nobuhiro Ishida through the ropes, unconscious. Birmingham's Matt Macklin spent four minutes on the canvas after taking a left to the liver.

"Your best chance against Golovkin is going toe-to-toe with him to see if you can get lucky," says Macklin. Golovkin has never been down, either as a pro or an amateur. Oh, and he had 350 fights in the unpaid ranks.

Ask Golovkin the secret of his power and he comes over all Elephant Man. "I am not an animal," says the 32-year-old, whose older brothers died while serving in the Russian army, when Golovkin was a small boy.

"I'm aggressive but I'm not punching with my eyes closed. It does annoy me when people say I'm just a puncher. There's also speed, positioning and tactics.

"But I do feel under a little bit of pressure to knock out every opponent I get in the ring with. I understand my situation, it's my job to entertain the fans. They don't want boring boxers, they want boxers to provide drama."

Trainer Abel Sanchez knows this better than most. When Sanchez first encountered Golovkin in 2010, he was an upright eastern European boxer who threw punches sparingly and waited for his opponents to make mistakes. Despite winning World Championships gold in 2003 and a silver medal at the 2004 Olympics, he was exactly what American fight fans didn't want.

At his gym at Big Bear Lake in California, Sanchez, most famous for training light-middleweight great Terry Norris in the 1990s, set about making his new charge fan-friendly - the kind of fighter who makes opponents make mistakes rather than waiting for them to happen.

On his debut with American television network HBO in 2012, Golovkin floored Grzegorz Proksa three times before the fight was stopped in the fifth. The fans became Golovkin's friends and he has been an HBO fixture ever since.

Since that victory over Proksa, Golovkin has finished all seven of his fights early. And when he's not actually knocking them out, he's making them wince. "He moves guys when he touches them," says Sanchez.

Now HBO's problem is finding Golovkin suitable opponents. His promoter, Tom Loeffler, says the biggest names in the 160lb don't want a bar of him. Golovkin is the mandatory challenger for Miguel Cotto's WBC title. But Golovkin isn't holding his breath.

"Miguel Cotto isn't scared of me," says Golovkin, "he's just a very smart guy. It's difficult to find opponents but I'm ready for everybody. It's very important to me to prove I'm the best in the middleweight division."

Golovkin is scrupulously polite, almost to a fault. He becomes bashful when you suggest he is one of boxing's biggest stars. "Maybe a little bit," he says. "But one step at a time. When people compare me to Marvin Hagler, it's too much for me. But some time in the future, maybe."

In boxing it pays to make a row, in and out of the ring. That said, no amount of noise is likely to bring Puerto Rican great Cotto to the negotiating table, nor unbeaten five-weight world champion Floyd Mayweather, whom Golovkin has offered to fight at light-middleweight.

Which means Golovkin will probably have to move up to super-middleweight in order to secure top-dollar, career-defining fights. And one man Golovkin has his eyes on is Britain's WBA title-holder Carl Froch. Some row that would be.

"I respect Carl Froch a lot, he's a very strong guy and a big star," says Golovkin. "That fight could happen in Las Vegas or maybe at Wembley Stadium. That sounds like a great idea. Maybe next year?"

It seems unlikely. Froch is expected to have a valedictory fight, possibly against Mexico's Julio Cesar Chavez Jr this summer, before hanging them up. However, unbeaten American Andre Ward, who hasn't fought since 2013 but has finally resolved his promotional issues, claims he is open to fighting the rib-crippling Kazakh.

But Golovkin is too polite and too sensible to look past Murray, the Englishman who has challenged valiantly for a world title twice.

In 2011, Murray was unlucky in only getting a draw against Germany's Felix Sturm. In 2013, many thought he had done enough to beat Argentina's Sergio Martinez, although it was no surprise when Martinez was awarded the decision. In a football stadium. In Buenos Aires.

"Martin is the best opponent I've faced in my career," says Golovkin. "I thought he beat Martinez. And he's hungry, because he knows this could be his last chance of winning a world title."

Whether Murray is hungrier than the kid who mangled miners on the streets of Karaganda remains to be seen. One thing is certain - Murray will see stars in Monte Carlo.