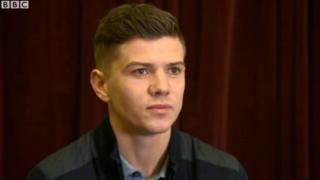 Hull boxer Luke Campbell tells BBC Look North that he has been "inspired" by his father's battle against cancer as he prepares to face Levis Morales in a lightweight bout on Saturday.

Campbell, 27, pulled out of the fight in early February because of his father's ill health before changing his mind less than two weeks ago.

Campbell says he would like to fight Coyle at the KC Stadium, the home of Hull City and Super League side Hull FC.