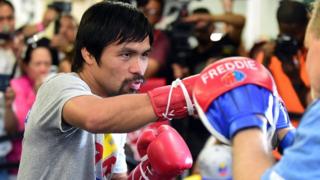 Pacquiao boxing 'better than ever'

Manny Pacquiao is boxing "better than ever" before his eagerly anticipated fight with Floyd Mayweather, according to his trainer Freddie Roach.

The fight on May 2 is expected to be the richest in boxing history, with the 36-year old WBO welterweight champion Pacquiao taking on the unbeaten WBA and WBC champion Mayweather, 37, in Las Vegas.

Speaking at an open training session at his gym in California, Roach says Pacquiao's "power is back" and that the Filipino fighter is motivated by a dislike for the American Mayweather "as a role model and a person".