On Saturday in Las Vegas, Floyd Mayweather and Manny Pacquiao will engage in the richest fight in history at the MGM Grand Garden Arena.

So much has been said about the numbers involved that it is sometimes difficult to remember there are other things at stake - namely the WBC, WBA and WBO welterweight titles and the title of best boxer of the modern era.

It is a fight everyone has an opinion on and BBC Sport has pooled the thoughts of boxers past and present, including some of the sport's greatest names.

"A turtle is only vulnerable when he sticks his head out - when he senses danger, he goes back into that shell. You can beat that shell up, but you're not hurting him. Pacquiao has to trick Mayweather out of that shell, make him think he's there for the counter. When he's not - 'bang' - capitalise on his mistake.

"Counter-punchers aren't good at catching up, we wait for you to come knocking at the door, we don't come to you. So counter-punchers need their opponents to be aggressive and then take advantage of slow feet and slow hands. It won't be a landslide win for Mayweather, it will be a hard-earned win. "

"Mayweather will put on a defensive masterclass, behind the shoulder, slipping and sliding, ducking and diving and not getting hit. He's a defensive genius, a magician in the ring. But Pacquiao should punch the shoulder, punch the arms, hit him round the back of the head, in the kidneys, take anything he can. 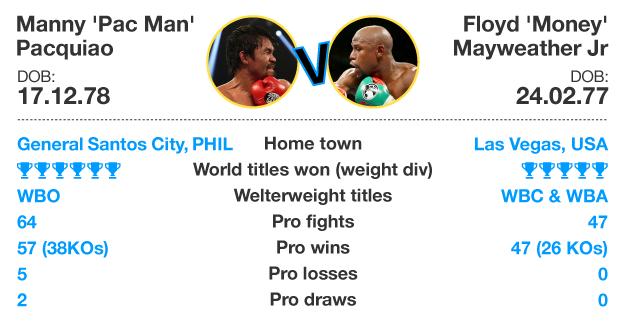 "Mayweather is just too good at adjusting, changing his style, adapting to what's in front of him. If there's ever a time for Mayweather to lose, that time is now, he's an ageing athlete. But I'm going for a close Mayweather points win."

Juan Manuel Marquez - three-weight world champion; lost to Mayweather, lost to Pacquiao twice, drew once, knocked him out in 2013

"Pacquiao needs to pressurise Mayweather and land punches with speed, power and accuracy. But Mayweather uses distance very well, is hard to hit and lands with counter-punches.

"I don't think it affected him when I knocked him out. I want Manny Pacquiao to win this fight, my heart is with Pacquiao as a boxer. But Mayweather wins because he's got such a difficult style."

"Manny has to be aggressive and Floyd's planning for him to be aggressive. Is Floyd going to match aggression with aggression, or is he going to use tactical boxing? He can do either. Manny can do one thing, Floyd can do two. Floyd will determine how the fight starts and how it ends.

"Manny's game plan has to be pressure, pressure, pressure. Floyd has never fought an opponent like Manny who throws so many punches, has power in both hands and is a southpaw. No-one has pressured Mayweather like Pacquiao will.

"Manny can be reckless and that's what Floyd will be planning on. He got reckless against Marquez when he had the fight won, went for the knockout and got knocked out himself. Hopefully he will have learned from that and be reckless at the right time. It's going to be a very good fight - I'm not sure who is going to win."

"Both fighters still have so much to give and on Saturday I'm sure they're going to produce something very special for the fans.

"This is going to be a tremendous match-up.

"Manny has hand speed and fast feet, and that will cause Floyd some problems early on. But as it progresses, I expect Floyd to make the adjustments he tends to make to counter that before pulling away on the scorecards."

Ricky Hatton - former two-weight world champion, lost to both at the MGM Grand

"But after a few rounds, Mayweather will do what he does best and suss things out. He always manages to adapt his style for the opponent he's facing and always finds a way to win. Love him or loathe him, he's a genius.

"I'm picking Mayweather to win on points. It will be a very close fight, nip and tuck, with almost nothing in it. But Mayweather will finish with his nose in front."

"Mayweather has a couple of ways to win the fight: as a counter-puncher, wait for Pacquiao to make mistakes and make him pay for those mistakes; or just box him, dance around, do what he does best. He's a little bit more versatile than Pacquiao.

"As for Pacquiao, if he can be the man who beat Oscar De La Hoya and Miguel Cotto, we're talking about a very interesting, physical fight.

"I think there will be a couple of surprises for the fans, in terms of knockdowns. But there could be dominance from Mayweather."

"Floyd can't fight the way he's been fighting if he wants to beat Pacquiao. He has to go forward and throw punches.

"Mayweather can't be on the ropes against a guy like Pacquiao. It's not going to work out. I think that it's going to be a great fight.

"I like Pacquiao, although I'm not saying Floyd can't win. But he's got to change the way he's been fighting."

"Manny chucks a lot of shots and comes from awkward angles, which Mayweather won't be used to, especially from a southpaw stance. Pacquiao is a very active fighter, he'll pressure Mayweather and make him uncomfortable.

"But Mayweather is just too clever, his defence is great and he'll find a way to win. It's got points written all over it, although if Manny thinks he's losing the fight and starts getting desperate late on, I can see him getting knocked out."

"It's going to go to the end because they'll be so careful. Pacquiao understands that he could get knocked out and Mayweather will be thinking: 'Pacquiao has knocked out a lot of guys.'

"Mayweather is a defensive genius. But he's not an offensive machine. So I think Pacquiao will win. He's smart and he's the underdog - he'll feel the crowd pulling for him. I've got a feeling he can win it by one round."

"It can be a very boring fight, with Mayweather just picking at Pacquiao, or it could be a very exciting fight if Mayweather stands more flat-footed.

"I almost knocked Mayweather out straight out of the gate - that would be a good tip for Pacquiao, he can't give Mayweather a chance to get comfortable or to pick up on his rhythm.

"If he is going to win against Mayweather, it's going to have to be in the first three or four rounds, tops. But Mayweather is the best in the world at avoiding punches, so I would have to go with Floyd."

"There are two scenarios: Pacquiao can push the pace and make Floyd fight. If he's in great shape, it can be an exciting fight; or Mayweather can figure him out and box him the whole night and have an easy win. He's going to fight in spurts and put the rounds in the bag. Nothing is going to change.

"The question is, can Pacquiao keep his composure and focus in the ring? He's going to have trouble hitting Floyd, so he has to stay calm and not get frustrated. He's going to throw five and six-punch combinations and maybe only one punch is going to land. If he gets frustrated, Mayweather will capitalise."

Your say - Mayweather or Pacquiao?