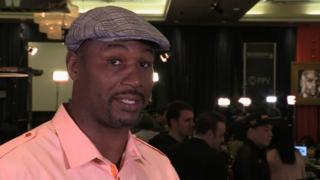 The two boxers meet this weekend at the MGM Grand in Las Vegas. It is estimated to be the richest boxing fight in history, thought to be worth half a billion dollars.

Lewis says he met Pacquiao on Thursday and was surprised by how relaxed the Filipino fighter seemed, the complete opposite of his American opponent.