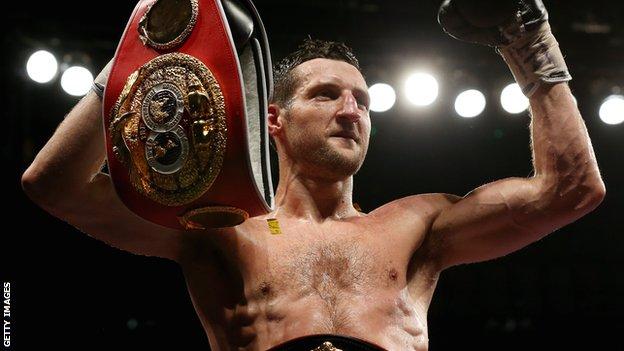 Froch was recently stripped of his WBA super-middleweight belt and was thought to be close to ending his career.

But Hearn said the 37-year-old is tempted by the prospect of one last big-money fight at Wembley Stadium.

"We have already opened negotiations with Golovkin's people and they are very keen," Hearn told the Daily Mail.

"I only want Carl to take it if he's genuinely motivated because it is a high-risk fight.

"Golovkin is the most feared fighter in the world and Carl doesn't need this fight. But he says he is intrigued by how he would deal with him. He's crazy that way."

Hearn later told BBC Radio 5 live that any bout would only take place if Froch was happy to get back in the ring, and stressed: "It really comes down to his hunger and desire to fight again."

Kazakhstan's Golovkin, 33, is the WBA middleweight champion and is unbeaten in 33 professional fights, including 30 knockouts.

Last Saturday he stopped American Willie Monroe Jr in Los Angeles and in his previous fight he beat Britain's Martin Murray, also inside the distance.

But he has struggled to secure big-money fights at middleweight and his promoter, Tom Loeffler, says he is willing to move up to 168lb to land a lucrative match with Froch.

Froch has not fought since knocking out domestic rival George Groves in front of 80,000 at Wembley last summer.

He has already confirmed he is not interested in fighting the winner of Saturday's IBF super-middleweight title fight between Britain's James DeGale and Andre Dirrell in Boston.