The two have baited each other for years while financial and venue issues have routinely scuppered negotiations.

"I'm going to his back yard to defend my title because that's what champions do," said Belfast's Frampton, 28.

Frampton claimed the IBF crown from Kiko Martinez in September 2014 and has defended his title twice, stopping Chris Avalos in Belfast in February before outpointing Alejandro Gonzalez Jr on his debut in the United States. 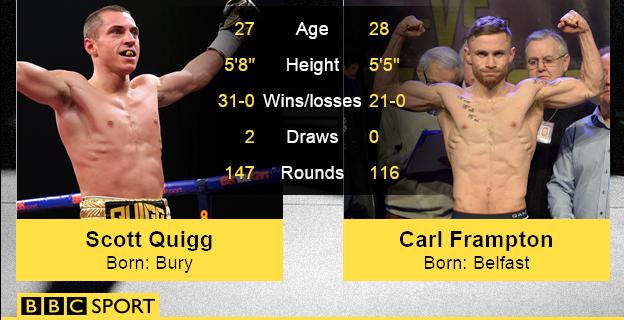 Quigg, 27, has made five successful defences of his title since claiming the WBA belt in October 2013.

However, for most of that time Quigg was the WBA's secondary champion - Cuban Guillermo Rigondeaux was the governing body's so-called 'super' champion until being stripped this week for inactivity.

It was this anomaly that enabled Frampton to claim that he was the "legitimate" champion and senior partner in any negotiations.

"I've finally got the fight I've wanted for so long," said Bury's Quigg.

"I've dedicated my life to this sport and I have never been more confident going into a fight. I know I will beat him in every department."

"This is one of a number of huge all-British showdowns that could light up British boxing over the coming years.

"By the time the fight comes, the clamour and excitement for it will bring boxing back into the mainstream.

"They are both unbeaten and until recently Frampton was a strong favourite for the fight.

"But he didn't look so impressive last time out [Frampton was floored twice by Gonzalez in round one], whereas Quigg scored a knockout. There's a genuine feeling it could go either way."