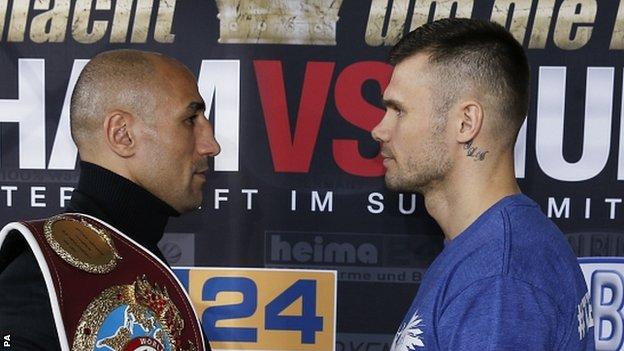 Martin Murray concedes his WBO super-middleweight world title fight against Arthur Abraham in Hannover on Saturday could make or break his career.

"I know I can win this and if I do, there are big fights out there for me," said the 33-year-old.

"If I don't win, though, it could spell the end of my career."

Murray has been unlucky in each of his three previous attempts, which were all in the middleweight division.

A draw with Germany's Sturm in 2011 was debatable, as was a unanimous decision loss to Argentina's Martinez in 2013.

No-one expected Murray to test the big-punching Golovkin but the Englishman showed plenty of heart before being stopped in the 11th round.

And the former British and Commonwealth champion, who stepped up to 168lb in June, believes he has the experience he needs to upset Abraham, a two-weight world champion.

"I'm expecting a tough fight but the timing is right,'' said Murray.

"Against Sturm, I jumped from domestic to world level, so even though there was an argument to say I won, it came too soon.

"Against Martinez, I knew I could win but going into the fight there were some doubts. This time, I know I have it within me to win."

The 35-year-old Abraham is a three-time world champion with 16 successful defences to his name.

The Armenian-born German lost to England's Carl Froch in 2011 but recently defended his title twice against Liverpool's Paul Smith.

Abraham has only been stopped once, although Murray feels he can finally get a decision in his favour.

"I don't think I have to KO him to win - I wouldn't be in Germany if I thought that," said Murray. "I believe I can beat him convincingly enough without worrying about needing a KO.

"This is the fourth world title fight I've had and the one I am most confident of winning. I would be more gutted not to win this one than the others."