Anthony Joshua says he can become "a legend overnight" by beating Wladimir Klitschko at Wembley Stadium on 29 April.

Britain's Joshua, 27, will defend his IBF heavyweight title against former heavyweight king Klitschko in front of a possible 90,000 spectators.

That would match the attendance record for a fight in Britain.

"It's now about beating the right people to go down in history," Joshua said.

"This is the start of a legendary campaign."

He added: "This is a fight that can change me from champion to legend overnight. Wladimir is a man I need to defeat to start building my reputation."

Champion and challenger met at a good-natured news conference on Wednesday, with both men insisting the fight needs no hype and will sell itself.

Joshua beat America Eric Molina in Manchester on Saturday, making it 18 knockouts in as many contests since turning pro in 2013. 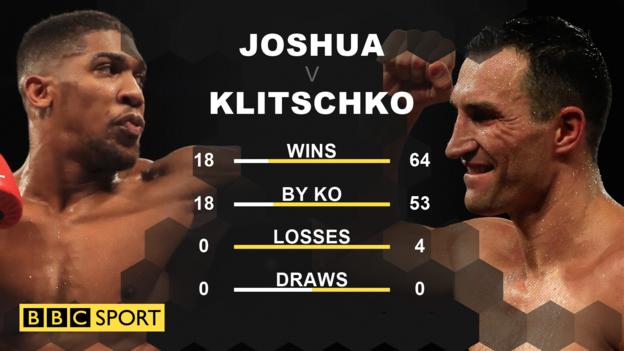 The Ukrainian, who turns 41 in March, was unbeaten for 11 years before Manchester's Tyson Fury upset him in Dusseldorf last November.

Two scheduled rematches fell through, before Fury relinquished the WBA and WBO titles after allegedly failing a drugs test and revealing he was struggling with mental illness.

"I've had a year-and-a-half break and I feel that's good," said Klitschko, who will hopefully be fighting for the IBF, WBA and Ring Magazine belt at Wembley.

"My motivation is as high as the sky. I had to wake up - it was the wake-up call before the big event. This is definitely a signature fight for Anthony and myself.

"It's amazing that two fighters aren't throwing tables or punching each other or saying what they're going to do. It's a different fight.

He added: "We're so evenly matched, it's a 50-50 fight. We're both Olympic champions, the same size, have the same strength - it could go any direction.

"I don't know the next time such a fight could happen in the heavyweight division. I'm super excited, on fire, happy to have this chance. You should be excited too."