The best boxer in a generation against one of the biggest names in the Ultimate Fighting Championship.

Floyd Mayweather Jr, regarded - before his retirement - as the world's best pound-for-pound boxer, will fight UFC star Conor McGregor in a light-middleweight boxing contest in Las Vegas on 26 August.

But how and why did the fight come about? Does McGregor have a chance? What impact will it have on the sports? And is it all just a money-making circus?

BBC Sport takes a look at the history and the reaction to the contest.

Mayweather out of retirement to fight 'little punk'

After Mayweather gained a convincing points win over Andre Berto in September 2015, the American, who has won world titles at five weights, said: "My career is over, that's official.

"You've got to know when to hang them up. There's nothing left to prove in the sport of boxing, I just want to spend time with my family."

However, there was growing interest in a fight between Mayweather and McGregor, after the Irish UFC star went on American chat show Conan and said he would "most certainly dismantle" Mayweather.

Talks between the two camps began in May 2016 and McGregor, who has never boxed professionally or as an amateur, was granted a boxing licence in California last November.

After social media insults flew from both sides, including Mayweather calling McGregor a "little punk", the Irishman claimed he had signed a contract for the fight and applied for a Nevada boxing licence, so it could be held in Las Vegas.

However, it was still a shock to both the boxing and UFC worlds when Mayweather, whose nickname is Money, posted a video on social media confirming the fight will happen at the T-Mobile Arena on 26 August.

Leonard Ellerbe, chief executive of Mayweather Promotions, said: "There is not one place I go to with Floyd where he doesn't get asked the question: 'Floyd, are you going to fight Conor McGregor?' All Floyd thinks about is fighting Conor McGregor."

Mayweather, 40, never entertained the idea of the pair meeting in a UFC event, saying "a real man fights standing up". Therefore, a boxing bout was the only outcome.

Bookmakers expect a one-sided contest, with the American as short as 1-12 to win his 50th professional fight, a landmark that would see him overtake legendary boxer Rocky Marciano, who retired after 49 victories.

However, the fight has not been well received by a large number of boxers.

"It's hurting the sport of boxing," added Alvarez. "It's a big circus and a joke because when a fighter from boxing gets into MMA (mixed martial arts) or a fighter from MMA gets into boxing it's just a big joke. People don't take it seriously."

Ricky Hatton, the only British boxer to fight Mayweather - losing in the 10th round of their Las Vegas bout in December 2007 - feels the fight should not count on the American's boxing record.

"Conor's the biggest star in UFC and, if he gets whitewashed by Mayweather, which he would, it wouldn't look good on the UFC," Hatton told Boxing News.

"The mixed martial arts people tell me he is fantastic because he is fearless, reckless and that makes him entertaining, but he is a hopeless boxer.

"He is a raw novice. Peter McDonagh, who has lost more times than he has won, is the Irish champion at Conor McGregor's weight, and he would beat McGregor in a 10 or 12-round fight. This will be an absolute mismatch."

'Boxing is a breeze for us' - what MMA thinks

McGregor, who at 28 is 12 years younger than Mayweather, has won 21 of his 24 MMA fights, including 18 knockouts, and has received some support from the UFC world.

"He has incredible power, a power that nobody else has - I've never seen anyone hit that hard," said Russia's Artem Lobov, who has sparred with McGregor.

"MMA is so much more demanding on the body - the wrestling, the changing levels, all that takes a lot out of you. Boxing is a breeze for us after MMA.

"If you look at Mayweather's fights, he often likes to get into the clinch, but what is a boxer in a clinch against a wrestler, an MMA fighter? Boxers are absolute novices in the clinch.

"Get a boxer and get him wrestling for a minute or two - the arms get so heavy, filled with blood, they can't even hold them up any more, they can't box." 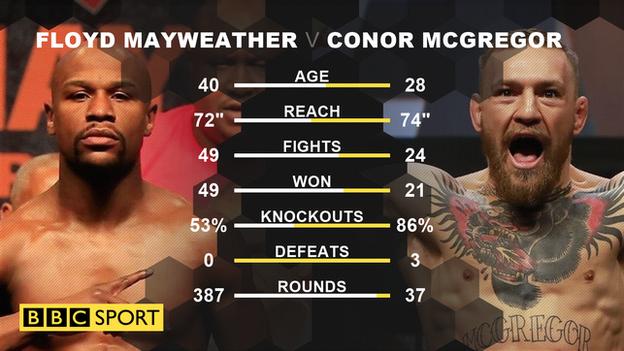 "Mayweather is 40 years old and he's always had problems with southpaws," said White. "Conor McGregor is 28 and a southpaw. Whenever he hits people, they fall."

American MMA fighter Holly Holm, who ended Ronda Rousey's unbeaten run with a brutal knockout in 2015, thinks McGregor will be able to adapt.

"I'm one of those who believes in being able to cross over," said Holm. "Boxing is a whole different world, but Conor really believes in himself, and he's going to put up a good fight."

How big will the fight be?

White, for one, is in no doubt.

The T-Mobile Arena holds 20,000 people, so the fighters will be performing live in front of less than a quarter of the 90,000 people who watched Anthony Joshua's thrilling win over Wladimir Klitschko in their world heavyweight title clash at Wembley Stadium in April.

However, the money will come not only from the live gate, but also through international television distribution, sponsorships, closed circuit and merchandise sales.

When Mayweather fought Filipino Manny Pacquiao in May 2015, the fight attracted a record of 4.4 million American pay-per-view sales, with the event generating more than $500m (£392.7m) in gross worldwide receipts.

Tickets will be in extremely short supply. Only 1,000 of 16,500 tickets were put on general sale for the Mayweather v Pacquiao fight at the MGM Grand - and some were then sold online for as much as £94,000. The rest of the tickets went to fighters, sponsors and promoters.

Such was the demand, hotels and bars charged people to watch the action on big-screen televisions.

Stephen Espinoza, executive vice-president of American television station Showtime Sports, said fans will pay to watch the McGregor-Mayweather fight because of the novelty.

"The sky is the limit," he said. "There is nothing to compare it against. No-one has seen this type of competition in the ring.

"We're not only drawing fans from the universe of boxing fans and the universe of MMA fans. We've actually tapped into the audience that really doesn't follow either sport."

Has it happened before?

Sort of. On two high-profile occasions, boxers have tried their luck in the UFC octagon, with one winning and one losing.

Most recently, in August 2010, James Toney - a three-weight boxing champion who had no MMA experience - took on Randy Couture. It did not last long.

Within a minute, Couture had produced a single-leg takedown. He then fired a series of unanswered lefts and rights to Toney's head before the fight was stopped.

The other time the worlds of MMA and boxing collided was in June 2009, when boxer Ray Mercer took on former UFC heavyweight champion Tim Sylvia.

Again, it did not last long - nine seconds in fact.

Mercer, who had fought Evander Holyfield, Lennox Lewis and Wladimir Klitschko, caught Sylvia with a crushing right hook with the first punch of the contest, knocking out his opponent.

In 1976, Muhammad Ali took part in a 15-round exhibition contest with Japanese professional wrestler Antonio Inoki. The bout - a mix of boxing and wrestling that had little to do with serious sport - ended in a draw.

'If it makes money, it makes sense' - boxers react on social media

'Kick back and enjoy' - UFC fighters react on social media

Analysis - the views from both sports

One of boxing's all-time greats will take on a man who hasn't had a single professional boxing contest and it'll become one of the most talked-about sporting events of 2017.

Mayweather is coming out of retirement at the age of 40 for a fight some have dismissed as a farce and a mismatch. McGregor is 12 years younger and the biggest draw in UFC, the most successful and popular brand in mixed martial arts. Insults have been traded for two years - when they first started, nobody believed for a moment this fight would happen.

They both draw huge audiences on pay-per-view TV and the showdown is likely to generate tens of millions of dollars for each man.

It's likely to be televised in the United States by Showtime, a cable network and one of the biggest investors in boxing in recent years. Executives there are saying their digital traffic in the past few weeks is leading them to believe this will be nothing short of a monster event and it's been built by the hype generated by these two masters of the art of hype.

To the uninitiated, Conor McGregor may come across as a brash, overconfident braggart, but a glance at his record tells a completely different story. Underneath the larger-than-life exterior lies a fierce, dedicated competitor who has more often than not backed up his pre-fight talk with big-time performances in the UFC octagon.

He successfully predicted his stoppage wins over Chad Mendes, Jose Aldo and Eddie Alvarez in successive UFC title fights. Now he's predicting he'll topple the most skilled boxer in this - or perhaps any - generation. Even by Mystic Mac's own standards, this one is a big ask.

The contest itself pitches a combat sport specialist (Mayweather) against a man blessed with one of the most comprehensive skillsets in combat sports (McGregor). The equivalent of a 100m sprinter against a decathlete, if you like. But in those terms, this fight is the 100m. Only a fraction of McGregor's formidable fighting arsenal will be in play here, and that tips the scales significantly in Mayweather's favour.

As well as the skills gap in pure boxing terms, there's also the issue of prep time. Conor has the dedication, the intelligence and the belief to walk into the T-Mobile Arena on August 26 as prepared as he possibly can be. But this is the equivalent of writing a PhD thesis without taking the course first. A passing grade is surely just making it to the scorecards, or even just looking competitive.

But that won't be enough for McGregor, whose ability to deliver on the big stage is right up there with the best you'll find anywhere in sport. The archetypal man for the big occasion, McGregor performs best when the lights shine brightest.

Mayweather is rightly the unbackable favourite, but McGregor certainly isn't a toothless opponent. Make no mistake, he has the power to trouble Floyd, especially with his left hand. But to hurt Floyd, Conor will have to land clean. In theory, he has 36 minutes to find Mayweather's chin. If he does, we'll see one of the biggest shocks in sporting history.

But it wouldn't be a shock to him. He's already predicted it. And he means it, too.

Get all the latest boxing news sent straight to your device with notifications in the BBC Sport app. Find out more here.