It is being billed as the biggest (and possibly richest) fight in combat sports history - and tickets are on sale at eye-watering prices.

When former five-weight boxing world champion Floyd Mayweather and UFC lightweight title-holder Conor McGregor step into the ring at the T-Mobile Arena in Las Vegas on 26 August, some 20,000 people will be in the arena.

The scrap for tickets during Monday's release was intense, short-lived and disappointing for the majority. But will anyone be willing to shell out $150,000 (£115,000) to be there?

Ticket resale website StubHub has tickets on sale at that price, with several others at a comparatively cheap $100,000 (£75,000).

American Mayweather, 40, will come out of retirement to face McGregor in the 29-year-old Irishman's first professional boxing bout.

McGregor's lack of experience has led to some criticism of the bout, from which both men are expected to earn as much as $100m (£78.4m).

This was not Dana White's plan...

UFC president Dana White wanted to avoid a repeat of Mayweather's 2015 bout with Manny Pacquiao, for which many tickets fell into the hands of brokers.

His solution was to sell seats through Ticketmaster, with each purchase limited to two tickets, and any transaction only possible with a code issued to Ticketmaster members.

Speaking earlier this week, White said: "A lot of shady things can go on with tickets, as if they aren't expensive enough.

"I wanted everybody to buy their own tickets. I'm buying my own, as are Conor and Floyd." 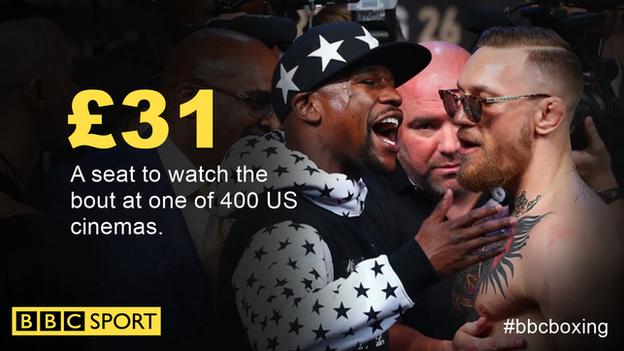 Mayweather Promotions has negotiated a deal to broadcast the fight in 400 cinemas across the US - and organiser Fathom Events told BBC Sport it expects "sold-out auditoriums" at an average cost of $40 (£31) a seat.

It is estimated the combination of pay-per-view revenue, ticket sales, sponsorship, merchandise sales and receipts from cinema ticket or closed circuit television venues will generate about $600m.

The number of pay-per-view buys will prove pivotal in whether the bout becomes the richest of all time.

Mayweather's bout with Pacquiao - regarded as the richest in history, with total revenue of about $623m (£476m) - had 4.6 million buys.