British boxer Scott Westgarth has died in hospital after falling ill following a light-heavyweight fight in Doncaster on Saturday.

The 31-year-old won the eliminator bout on points against Dec Spelman.

He appeared to be in pain during post-fight interviews and was then taken to hospital after falling ill backstage.

The rest of the show, headlined by Curtis Woodhouse who was due to fight in a Commonwealth light-welterweight title eliminator, was cancelled.

Westgarth, who was the underdog going into Saturday's bout, was chasing an English title fight.

His previous record was six wins, two losses and a draw.

The news was announced by Westgarth's promoter for the weekend fight, Stefy Bull, who said the boxer was "a young man doing a job he loves".

Westgarth's opponent on the night, Spelman, also paid his tribute. 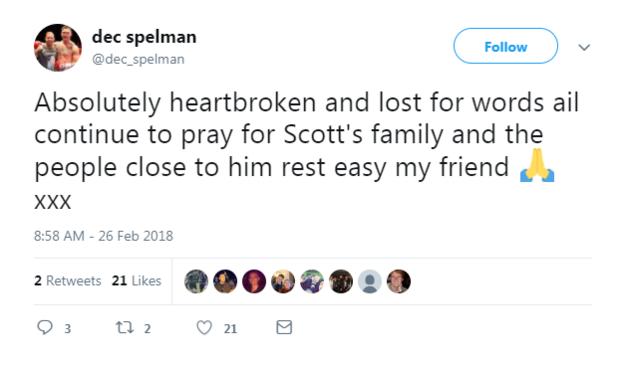 Following news of Westgarth's death, the British Boxing Board of Control (BBBofC) reiterated that it has improved safety in the sport.

"I think boxing in this country has changed remarkably with regards to medical procedures over the last 20-30 years," general secretary of the BBBofC, Robert Smith, told the BBC. "We're always looking to improve things."

"We do appreciate that this is a tough sport and we try to make it as safe as possible but that's not always the case.

"It's a very small sport, really. We are a little family and when things go wrong, we do all stick together. We don't go into this sport with our eyes closed and we know how dangerous it can be.

"I've been a boxer and I would still do it tomorrow, if I could. This is a terrible time for the sport and the family and I can't say anything that will make anything better. We've got to try to make sure it doesn't happen again but we know and I know deep down there is a possibility it will."

Canada's Tim Hague was the last professional boxer to die following a fight, two days after a bout last June.

Scotland's Mike Towell died from a brain injury following a bout in September 2016.

Last week, Towell's opponent, Dale Evans announced his retirement, saying his hunger for the sport has been replaced by "worry and fear".