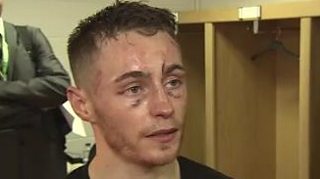 Ryan Burnett is pleased to successfully defend his WBA world bantamweight title with a points win over Yonfrez Parejo earned despite suffering a suspected broken hand.

The Belfast boxer sustained the injury in the third round but stayed in control for the remaining nine rounds to easily defeat the Venezuelan in Cardiff.

Two of the judges gave Burnett all 12 rounds as he took a 19th straight win.

'Football needs to wake up' - Shearer