Jamie McDonnell will land one of the biggest overseas wins by a British fighter when he meets Japan's Naoya Inoue, says trainer Dave Coldwell.

McDonnell, 32, will defend his WBA world bantamweight title against an unbeaten fighter nicknamed 'The Monster' in Tokyo on Friday.

Inoue, 25, has 15 wins and is seeking a world title in a third weight division.

"Jamie wants this as he believes if he beats Inoue he will get the respect he deserves," Coldwell told BBC Sport.

"Jamie has been unbeaten for 10 years, world champion for four but still doesn't have the respect he deserves.

"He has been in with some top fighters and he is still not spoken about in the top British fighters.

"He wants a fight where everyone says he will be smashed as that gives him that motivation. He knows if he pulls this off it's one of the greatest wins abroad ever." 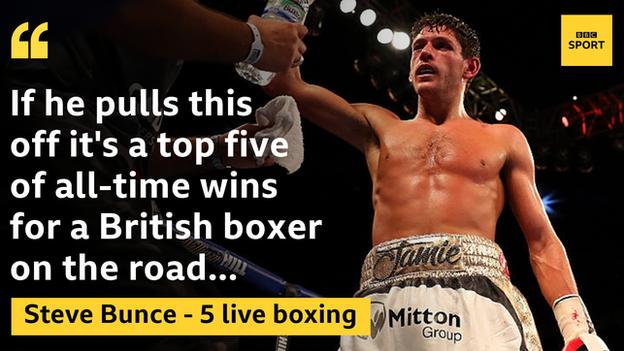 Inoue has knocked out 13 of his opponents, earning him a reputation as a devastating puncher.

He claimed a world title at light-flyweight in his sixth professional bout and moved up to super-flyweight two fights later to pick up another which he has since defended six times.

The home fighter is priced as 1-6 with bookmakers, though McDonnell, speaking on BBC Radio 5 live's boxing podcast, insists he is in "physical and mental shape like never before".

The Doncaster fighter added: "If I beat Inoue, everybody is going to know my name all across the world. That's given me the motivation."

Coldwell, who also trains former world cruiserweight champion Tony Bellew, took McDonnell to Dubai for the final two weeks of his training camp before landing in Japan with a week to spare.

McDonnell - at 5ft 10ins - will hold a five-inch height advantage over the challenger but his size means making the 8st 6lb limit requires additional planning when fighting overseas.

"There is no way we could have done it for three weeks here in Tokyo," Coldwell added.

"Where we are is all Japanese food - it's not what we would have had at home.

"We have found a British tavern where we can go and cook food ourselves, they will let us use the kitchen."

McDonnell must make the weight on Thursday before fighting on Friday evening, which will be lunchtime in the UK.

His 'regular' version of the WBA title will be on the line, with Northern Ireland's Ryan Burnett holding the 'super' version issued by the sanctioning body.

'A top-five away win' - analysis

This is a huge ask against the brilliant Japanese fighter. Inoue for me is one of the most watchable fighters on the planet. We have talked a lot about Vasyl Lomachenko who won his second world title in a second weight in his seventh fight, to put it in context, Inoue did it in eight.

It's a hard place to win, historically. If Jamie McDonnell can pull this off, it's a top five of all-time wins for a British boxer on the road.

It's over five years since Jamie McDonnell first won a version of the world title. He has been on the road, under radars, buried on undercards. If he wins, it should change how we look at this kid.