Danny O'Connor has pulled out of his first world-title fight after collapsing attempting to make the 10-stone weight limit.

O'Connor, 33, was due to fight fellow American Jose Ramirez for the WBC light-welterweight belt on Saturday.

The WBC confirmed he was taken to hospital suffering "dehydration symptoms", while his promoter said he thought his kidneys had "shut down".

O'Connor said he "let the idea of being a world champion cloud my judgement".

Promoter Joe DeGuardia of Star Boxing said his fighter, who has won 30 of his 33 professional bouts - 11 by knockout - "collapsed leaving the sauna" while attempting to cut a "perfectly normal" two pounds.

O'Connor posted an image of himself in hospital on social media, saying: "Heartbreaking to be rushed to the hospital and deemed medically unfit to fight.

"Nothing is more important than my health." 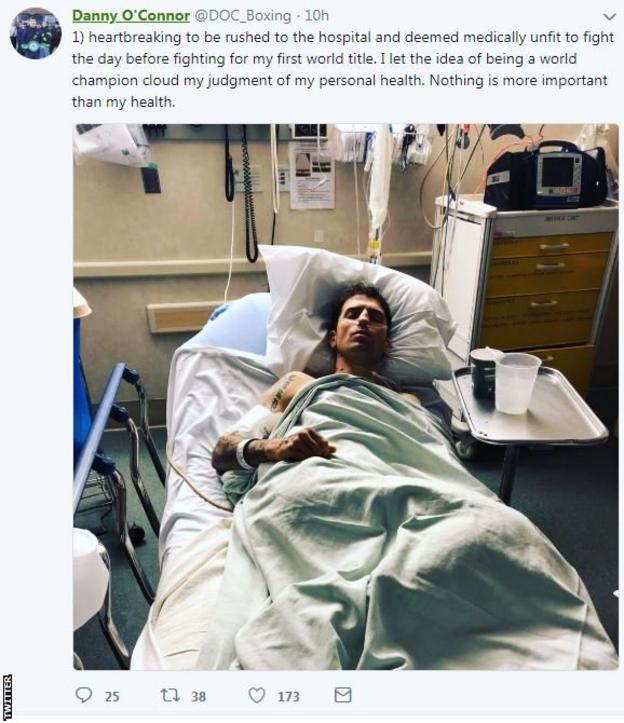 "He was rushed to the hospital and admitted suspecting his kidneys may have shut down," DeGuardia added in another social media post.

"It pains us to show these photos of Danny but his team and wife agreed that it was important to show the harsh realities of this sport and how hard fighters work to make weight and to what lengths they push themselves."

Saturday's bout was due to take place in Fresno, California.

Ramirez, unbeaten in his 22 professional fights, was set to make the first defence of his world title having beaten compatriot Amir Imam in March.