The 28-year-old British fighter's promoter Frank Warren reached an agreement with Andrade's representative Eddie Hearn for the bout on Wednesday.

Both are unbeaten and the fight could take place in October in the US, said Hearn.

Warren and Hearn reached an agreement just before a purse bid for the fight was set to take place.

In June, Saunders pulled out of a world title bout against fellow Briton Martin Murray after injuring his hamstring.

The fight had already been postponed before that when Saunders suffered a hand injury, and Murray called the former Olympian a "hypocrite".

Saunders last title defence was in December when he outclassed David Lemieux in Canada and then demanded a unification bout with Kazakh Gennady Golovkin who holds the WBA, WBC, and IBO middleweight titles.

"Both us and him were happy with the terms and think he wins the fight whether it's here or in Andrade's back garden," wrote Warren on Twitter. "As he showed against Lemieux he's not fazed by a trip away.

"We fancy this fight big time and it's the right money so that's he's prepared to travel." 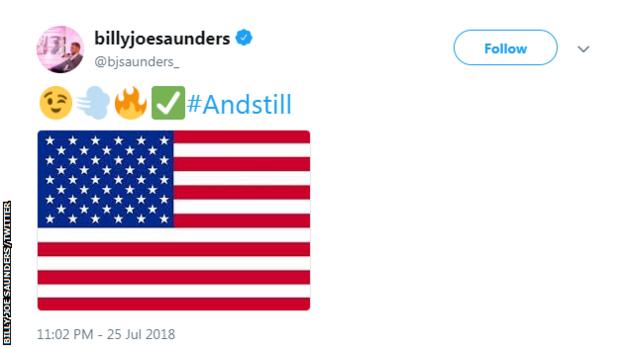 "Hopefully, we can put the fight in my hometown (of Providence, Rhode Island)," Andrade told ESPN. "When you have the financing behind you, you can make deals. This is the type of team I needed in my career. Better now than never. I put myself in a great position."

Hearn signed Andrade, a southpaw like Saunders who fought at the 2008 Olympics, two weeks ago.

He has not boxed since he moved up to middleweight and beat Alantez Fox in a one-sided decision in October.