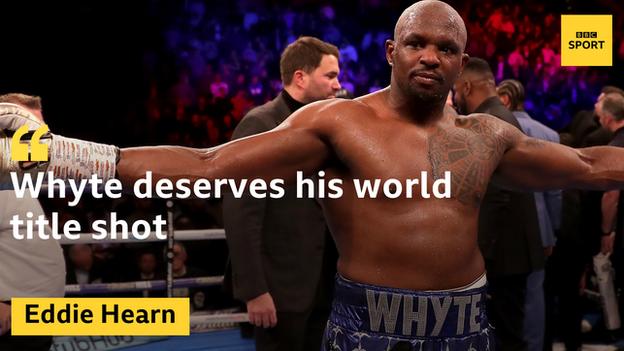 In Manchester, Josh Warrington retained his IBF featherweight world title with a unanimous points win over Carl Frampton in a fight-of-the-year contender.

So what next for Warrington and Frampton? And will Whyte get a rematch with world champion Anthony Joshua?

After Whyte beat Chisora for a second time in two years, he called out Joshua for a rematch.

Joshua, the IBF, WBA and WBO champion, said the 30-year-old was third on his list of targets, behind WBC title holder Deontay Wilder and Tyson Fury.

He knocked out Whyte in the seventh round when the pair met in 2015 and has a date at Wembley Stadium booked for 13 April, but is yet to decide the opponent.

Whyte has not lost since facing Joshua and is the number one WBC and WBO contender. This year he has knocked out Lucas Browne, beaten former WBO champion Joseph Parker on points, and knocked out Chisora.

"Fury wants Wilder - if that is not the case then he will look at the other guys who could be a contender for 13 April," said Hearn.

"After their [Whyte and Joshua's] first fight and their history and everything Whyte has done this year he deserves his heavyweight world title shot.

"Whyte will be called as the WBO mandatory challenger in the early part of 2019. By September, Joshua is supposed to face him anyway. I believe he will get a shot; it just depends whether that will come on 13 April or not."

'Warrington may always be the underdog' 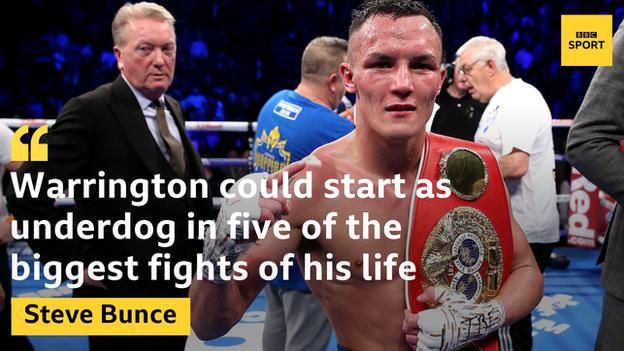 Warrington stunned Lee Selby to win the IBF world featherweight title in May.

He backed up that victory against former two-weight world champion and favourite Frampton in his first title defence, which took his professional record to 28-0, with six knockouts.

"We played out a million different results," said BBC analyst Steve Bunce. "I opted for a draw and controversy, there was no discussion ever of Warrington hurting Frampton."

BBC boxing correspondent Mike Costello added: "In fairness, you look at his record going into the Frampton fight - 27 wins, six inside the distance. That statistic tells you he has power but it is not concussive or fight-changing power. Tonight it was.

"He was shaking Frampton to his feet time and time again. It was an emphatic win for Warrington."

Warrington said after the fight: "I like the [underdog] title. It takes the pressure off."

"The mad thing is, the moment it is announced - if it is Russell, or Valdez or Santa Cruz, they won't start just as favourites, they will start as prohibitive favourites," said Bunce.

My initial reaction, looking at Carl Frampton's body language, is that he looks like a man absolutely in a hole

"This kid could beat all three of those on his day, I believe that. He could start as underdog in five of the biggest fights of his life, five world title fights.

"He might go the rest of his career as an underdog. He is not interested in, say, defending against British champion Ryan Walsh at home at Elland Road. He wants one of the big three."

For Frampton, 31, the defeat is a blow to to his desire to meet Santa Cruz for a third time, having lost the belt to the Mexican in January 2017.

Bunce added: "No-one is talking about a rematch between Frampton and Warrington. My initial reaction, looking at Carl, pure body language, is that looks like a man who is absolutely in a hole.

"One thing I will say is if you're going to come back, come back soon. Don't come back next November; get in the gym in January."

Costello suggested Warrington's victory showed his skill as a fighter.

He said: "We have always seen Frampton as a man who fights with his head as much as his heart and [against Warrington] he got it the wrong way round.

"I think what we have seen from Warrington is a man who can adapt. It is something he hasn't been given a lot of credit for. After what he has done against Frampton and against Selby, two very different styles of fighters, he has found a way."

It was the clash of the pay-per-views on Saturday as Frank Warren and Hearn, British boxing's two biggest promoters, went head-to-head with their shows.

The decision to stage both fights on the same night was criticised by some fans.

We are doing 60 shows worldwide next year. We will be clashing with ourselves, let alone other promoters

But Hearn, managing director of promotions company Matchroom Sport, said: "The pleasing thing to come out of tonight, is whatever you bought, you were happy with - ultimately as a promoter and for the sport of boxing, that is what matters.

"For people who spend their hard-earned money to come to the arena or watch it live on TV, you want them to love what they have seen and have value for money. It sounds like everyone got that.

"It's going to get worse, you have ITV, BT, Sky, Channel 5. We [Matchroom] are doing 60 shows worldwide next year. We will be clashing with ourselves, let alone other promoters.

"Let's embrace what a great time it is for British boxing, rather than moan all the time."