In 1967, middleweight boxer Rubin 'Hurricane' Carter and John Artis were convicted of triple murder in the United States. They spent almost 20 years in prison, maintaining their innocence, before being released. BBC World Service has investigated the murders - at the Lafayette Bar and Grill in Paterson, New Jersey - in their podcast series The Hurricane Tapes. This is their story.

Halifax in Nova Scotia was the furthest north either of us had ever been.

We weren't entirely prepared for this leg of the trip. One of us had only brought shorts, despite it being October, while the other had a rasping cough that makes radio production fairly awkward.

Our mood was improved by the driver at their airport, who met us with a sign that read "Mr and Mrs Hammer".

Lesra Martin was born and raised in the most impoverished part of New York City, and was destined for either jail or an early death.

When we met him, he was sitting in the law department of Dalhousie University, where he had studied.

He was immaculately dressed: a blue waistcoat hiding a mustard yellow shirt, only the sleeves allowed to show through.

His wire-framed glasses were perched at the end of his nose as he clutched his leather attache case.

He'd gone from being an illiterate teenager in the ghetto to a law graduate, thanks in no small part to an idealistic Canadian commune. 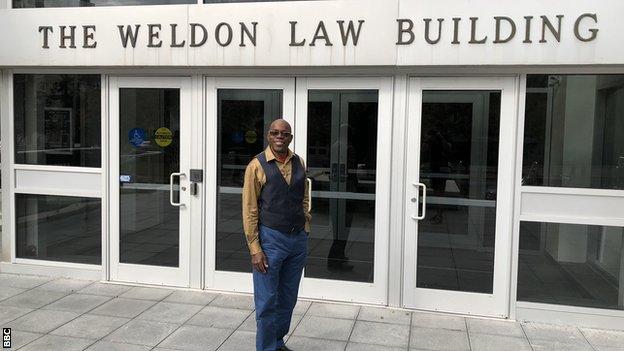 A group of famous celebrities had only been able to gain Carter a few months of freedom. It would be a teenager and 12 Canadians who would play the biggest part in his eventual release.

The Canadians were young, idealistic people who lived together, trying to change the world while selling scarves and jumpers from a local shop.

Carter had written an autobiography in prison, The Sixteenth Round, which had to be smuggled out of the prison, piece by piece.

Martin, having moved to Canada with the promise of a new life with this Canadian group, saw the book in a shop.

He could not read but he saw something in the cover - a close-up photograph of Carter - that spoke to him.

He begged his new family to teach him to read.

When he had closed the book, after reading it for the first time, he turned to his new guardians and said: "We have to get him out."

Despite our producer coughing throughout the interview, we spent two hours talking to Lesra about his life, his relationship with Carter and his time at law school.

At the end of the interview, Martin walked over, picked up a pen, and scribbled down the name of a cough medicine that is only available in Canada.

And he was right.

Each week, BBC Sport will publish a new article to coincide with the latest episode of The Hurricane Tapes. A longer feature piece on the BBC World Service's investigation will then be published at the end of the podcast series. The tapes had been missing for nearly 10 years since author Ken Klonsky recorded a series of conversations with Carter for his book Eye Of The Hurricane: My Path From Darkness To Freedom. The audio contained in the tapes has not previously been heard by anyone other than Ken and Rubin Carter.