The bout will be heavy underdog Crolla's second in the United States.

"Lomachenko is a great talent, but Anthony is in great shape and ready for this chance," said promoter Eddie Hearn after both camps agreed terms on Tuesday.

Manchester-born Crolla - who suffered a fractured skull when he was hit by a concrete slab as he confronted two burglars in December 2014 - won the WBA lightweight title with a fifth-round knockout of Colombia's Darleys Perez in November 2015, but was defeated by Jorge Linares in 2016.

Despite the former champion winning his last three fights against Daud Yordan, Edson Ramirez and Ricky Burns, Crolla faces a tough task against Lomachenko at the Staples Center.

A two-time Olympic gold medallist, the Ukranian has won world titles at featherweight, super-featherweight and lightweight in his 12-fight professional career.

"It's a huge opportunity for Anthony," Hearn added.

"He has earned his stripes - a former world champ who has fought the best.

"He won the final eliminator against Yordan in November, and I'm happy he gets this chance now." 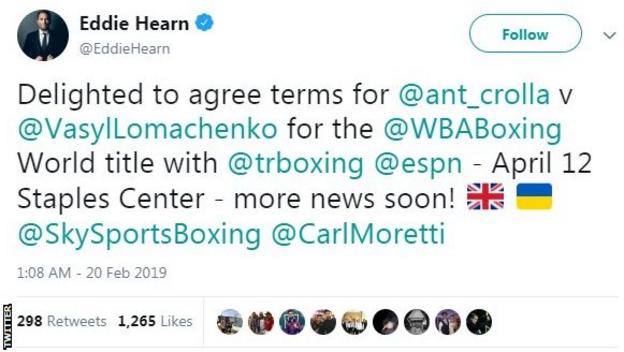