Britain's Amir Khan says he will live out a dream in the "last chapter" of his career when he challenges Terence Crawford at New York's Madison Square Garden.

American WBO world welterweight champion Crawford - one of boxing's most decorated names - is a 1-12 favourite with bookmakers for Saturday's bout, to be broadcast on BBC Radio 5 Live.

"A win here would top everything," Khan said. "Now I'm reaching for something no-one really expected me to reach."

He added: "I remember when the legends fought at Madison Square Garden.

"I'd watch fight previews from here over and over. I'm living that now. I want to win this so badly now just to prove a point."

Crawford's perfect 34-fight record has seen him capture world titles in three weight classes, including holding all four belts to become an undisputed champion at super-lightweight in 2017.

Khan has received praise in some quarters for taking on Crawford when a fixture against British rival Kell Brook looked set to offer a healthy pay day late in a career which took off with a 2004 Olympic silver medal.

"I sometimes forget how long I have been doing this for," 32-year-old Khan told 5 Live Boxing.

"There's no added pressure now. I have told people how I feel. I don't want to be in the game too long, hitting 35. I always wanted to retire young.

"Maybe my body will only let me go so long. I get aches and pains. My body doesn't recover as quickly as it did when I was young and you start seeing these things in your body.

"So I feel like it's the last chapter. I want to enjoy my life with my family, not think about boxing, and eat what I want." 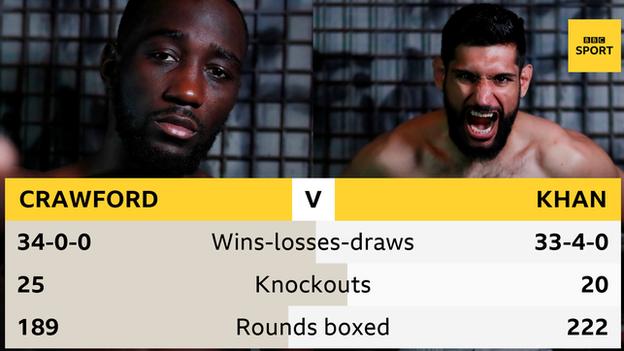 Can Khan deal in moments?

Khan's last world-title shot saw him knocked out by Saul 'Canelo' Alvarez in 2016. The former super-lightweight champion had stepped up to middleweight to face the classy Mexican but questions over the durability of his chin arrived quickly nonetheless.

Khan's punch resistance has often been a point of contention and his trainer Virgil Hunter has spoken about needing to "re-programme" him in order to bolster his concentration levels and stave of the threat of taking heavy shots.

Costello said: "There are these brief moments where he seems to freeze and lose concentration. They are only brief moments but at the highest level you haven't got moments against the likes of Canelo, Danny Garcia and certainly Crawford.

"I have been watching back Crawford's 12 world title fights. If he fights an orthodox fighter, he starts a fight orthodox. If he fights a southpaw, he starts southpaw and then switches late in the round. One of the keys will be how Khan deals with a switch hitter."

Hall of fame trainer Freddie Roach, who used to work with Khan, has spoken of his need to focus on stealing points rather than entering "a slugfest" with the champion.

Radio 5 Live analyst Steve Bunce added: "It's like having 12 separate fights in one fight. Get through a round, win it and start again.

"What if Amir can have that one final day where he doesn't use his heart but uses his head - using his jab, speed and doesn't get too involved?

"Everyone seems to understand how Amir Khan can win but it's very different to saying he will win."

'A bridge too far?' - predictions

British promoter Frank Warren: "It's a tough, tough fight for Amir but that has never bothered him, has it? He's always been happy to get in there with the best.

"He has fast hands and great reflexes. His problem is sometimes he's a bit too brave for his own good. Its all about him maintaining a discipline and a focus.

"I hope he wins it on Saturday. My heart is for him but my head says it will be a bridge too far."

British trainer Dave Coldwell: "I was cut man in the corner when Crawford fought Ricky Burns. You can watch what you want on TV but when you're that close, you appreciate how good they are and the things that don't come across on television.

"I would lean to a Crawford stoppage later on, once he's figured him out."

Former two-weight world champion Paulie Malignaggi, who will be ringside with Radio 5 Live: "It's all about what Amir has left in the legs. If he can get in and out with that style, then he can cause Crawford problems."

Former world cruiserweight champion Tony Bellew: "This would be an incredible win for British boxing and would breathe so much fire into Amir's career, but, like the Canelo fight, this could just be a step too far.

"It wouldn't surprise me if Amir has his moments in the fight, but I just think Crawford will be a little too good."