Former world champion Manny Pacquiao will return to the ring to fight Keith Thurman in a WBA welterweight bout in July, promoters have confirmed.

The 40-year-old Filipino will face Thurman, ten years his junior, in the 71st fight of his career.

Thurman will aim to defend his WBA super welterweight title against the eight-division world champion.

"The summer just got a little hotter", the veteran boxer said on Twitter.

Promoters confirmed the fight in a statement, describing it as "the biggest night of boxing this year". A venue is yet to be confirmed.

Pacquiao beat American Adrien Broner in January, a win that took his record to 61-7-2 with 39 knockouts.

Ahead of the fight earlier this year, Pacquiao said: "Age is just a number. What matters is how you prepare and that you're working hard."

Meanwhile, Thurman improved to 29-0 after returning from a near two-year absence in January to retain his title with a 12-round majority decision over Josesito Lopez.

"Maybe Brooklyn, maybe Vegas, wherever Manny Pacquiao wants it," Thurman said in January. "I'd even fight him in the Philippines if I have to." 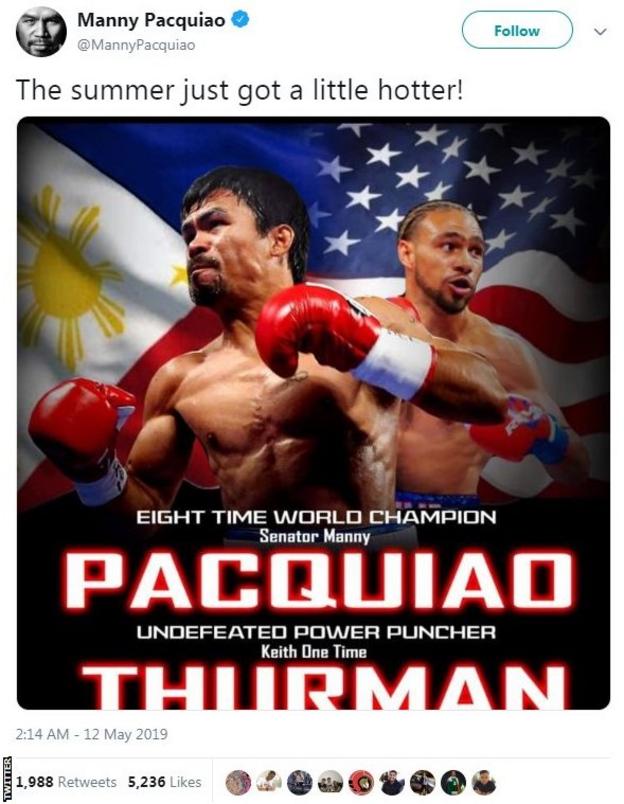